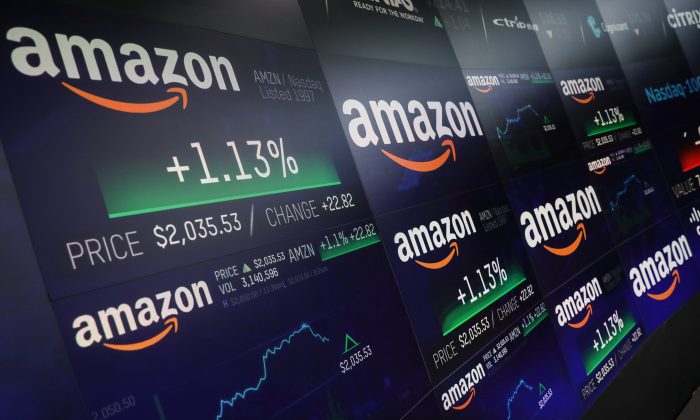 The Amazon.com logo and stock price information is seen on screens at the Nasdaq Market Site in New York, on Sept. 4, 2018. (Mike Segar/Reuters)
Stocks

Bears Grab Ahold of Amazon Stock as Market Falls Into Turmoil: What’s Next?

Amazon.com Inc. gapped down under a key psychological upper level at the $3,000 mark on Friday morning and then slid about 3 percent lower before bouncing temporarily and dropping toward the low-of-day again.

The tech giant has plummeted almost 10 percent this week and is down more than 21 percent off its all-time high of $3,773.08.

Amazon is the third-largest holding in the SPDR S&P 500 ETF Trust, after Apple Inc. and Microsoft Corporation, with a 3.6 percent index weighting and its weakness has been dragging the general markets down with it.

The dramatically lower prices are the result of both fear hitting the markets ahead of the Federal Reserve’s monthly meeting next week and the result of negative delta options trading, where the traders began aggressively selling their call positions and buying puts while also selling their underlying shares.

Graphic: Spot Gamma’s HIRO suggests selling of calls and buying of puts in Amazon on Thursday. This is a negative delta trade that dealers are to hedge by selling stock, thus exacerbating weakness.

Trouble for Amazon may not be over yet because on Friday afternoon, the SPY was battling an important potential turning point for the markets at the 200-day simple moving average. If the SPY falls below the level, it could toss major tech stocks, and others, into a bear market.

On Friday afternoon, Amazon was heading toward a lower support area at $2,881, which the stock has not traded below since July 1, 2020. If the stock falls below the level, it could plummet quickly as extreme fear sets in.

If Amazon closes the trading day near its low-of-day price, it will print its third consecutive bearish Marubozu candlestick pattern, which indicates lower prices may come on Monday. The move lower on Friday also came on higher-than-average volume, which indicates a high level of interest from the bears.

A relief bounce on the daily chart will eventually come because Amazon’s relative strength index is measuring in at an abysmal 23 percent. When a stock’s RSI reaches or falls below the 30 percent mark it becomes oversold, which can be a buy signal for technical traders.

Bulls want to see decreasing bearish volume and then for the stock to trade sideways in consolidation, which would indicate fear is subsiding. Bulls could then watch for a reversal candlestick to eventually print such as a doji or hammer candlestick. There is resistance above at $3,000 and $3,131.06.