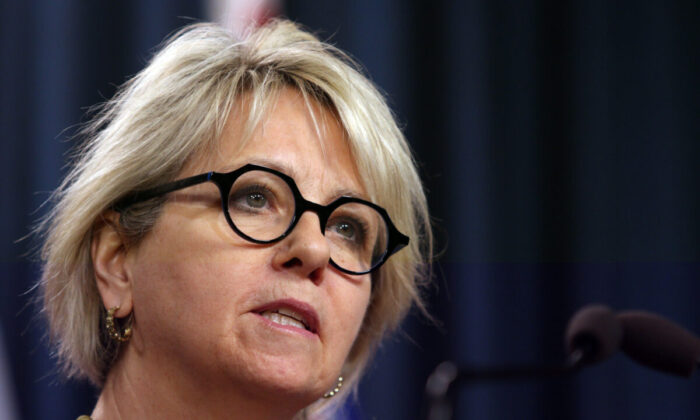 Dr. Bonnie Henry speaks during a press conference at the Legislature in Victoria on Jan. 22, 2021. (Chad Hipolito/The Canadian Press)
Canada

During a press conference with provincial Health Minister Adrian Dix, Dr. Bonnie Henry said concern from several school districts heightened her need to create a legal tool allowing the collection of the information.

She said whether schools will mandate vaccination is a decision the school districts will have to make individually, but that the districts need information about the vaccination status of staff to make an informed decision.

According to Henry’s new health order, medical health officers can work with school districts and demand employees confirm whether they have been vaccinated against COVID-19.

“We know that several school districts had challenges in obtaining this important information over the last few months,” Henry said.

“Concerns were expressed from unions and others about the legality of obtaining this information. So this is to make it very clear.”

At least one superintendent agrees. Kevin Kaardal, the superintendent of schools and CEO of Central Okanagan Public Schools, tried collecting vaccine status data from its employees, but couldn’t spur enough response. The new Provincial Health Order could change that.

“Our Board of Education issued verification requirements a couple of months ago and did a survey as part of a five-step process,” Kaardal told The Epoch Times.

“And then we tried to find out how many of our staff are vaccinated for assessed risk. We got about a 60 percent response, which wasn’t enough. And so this health order certainly helps with that process.”

However, the B.C. Teachers Federation (BCTF) and the Central Okanagan Teachers’ Association (COTA)  have expressed about privacy implications if school employees are compelled to provide their personal vaccination information.

In a letter sent to their members in December, BCTF president Teri Mooring and COTA president Susan Bauhart said they consider a request by employers for vaccination information a breach of privacy rights.

Mooring says, however, that it’ll be a different situation if a mandatory vaccine policy were introduced, which she is in favour of.

“We’ve been calling on the provincial government or the provincial health authority to do this. The government says they can’t because they’re not the direct employer, and that’s true. But the Provincial Health Officer absolutely could do this, and it’s frustrating that it’s not happening,” Mooring told The Epoch Times.

Action4Canada, a grassroots activist organization opposed to vaccine mandates who canvassed the school districts to obtain their position on the matter, says opposing school trustees are concerned about personal liability.

Charlene Le Beau, a lawyer working with the Justice Centre for Constitutional Freedoms, says Section 7 of the Canadian Charter of Rights and Freedoms has a provision to protect people from disclosing information that could jeopardize their right to security of the person.

“When the government compels a person to do or disclose something against his or her will, Section seven of the Charter may be engaged,” Le Beau said in a statement provided to The Epoch Times.

“Section seven protects personal autonomy involving ‘inherently private choices’ that go to the ‘core of what it means to enjoy individual dignity and independence.’”

Still, Le Beau cautioned anyone who would argue this issue is settled. She notes that disclosing vaccine status was also the initial step Henry imposed on B.C. health care workers before eventually locking non-vaccinated staff out of medical facilities and making vaccination against COVID-19 a condition of employment.

She added Henry said non-vaccinated school staff would pose a “health hazard” to students and other employees as defined in the Public Health Act.

“This gives her substantial powers under sections 30-32 and 39 of the Public Health Act to make various orders against those unvaccinated school staff,” Le Beau said.

“The order may well be the province’s way of getting around those school districts who refuse to impose a vaccine mandate on their staff.”

B.C.’s largest school district voted against imposing a vaccine mandate last year and its superintendent said they intend to uphold that decision.

“Our Board of Education has made a decision not to pursue the proof of vaccine status unless directed to by health,” Surrey school district superintendent Jordan Tinney said in a video message posted on the Surrey Schools website on Jan. 18.

“We have not been directed by health. We checked in with our medical health officer yesterday. There is no change.”