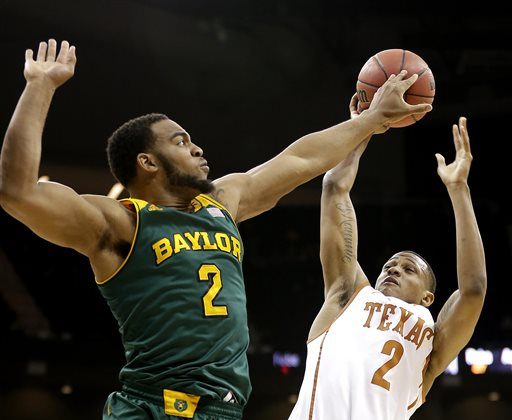 It’s the Baylor Bears and the Iowa State Cyclones in the Big 12 men’s basketball championship game on March 15.

Tip-off is scheduled for 9 p.m.

Live streaming is available via ESP3.

See a Baylor-Iowa State game preview from AP below.

KANSAS CITY, Mo.—Baylor coach Scott Drew appreciates the way the Big 12 orchestrates everything surrounding its title games: the confetti, the video montages, the trophy presentation to the winning team.

That’s exactly where the Bears have been twice in the last six years, losing each time to former conference member Missouri. They’ll try to end that streak of futility as a No. 7 seed on Saturday night when they face No. 16 Iowa State in their fourth game in four days.

“I think any time you get to a championship game or have an experience, you can take some things away,” Drew said Friday night after an 86-69 semifinal win over Texas.

“And I think the big thing is sometimes when you get to a championship game, you’re more excited to be there than really focused on winning it,” he said. “More experience doesn’t guarantee you’re going to win, but hopefully it adds a little hunger seeing those other teams celebrate.”

Among those who recall watching Missouri dancing on the Sprint Center floor two years ago were Cory Jefferson and Brady Heslip, who ushered Baylor to its win over the Longhorns.

Jefferson had 20 points and 13 rebounds in what’s becoming his standard double-double, while Heslip hit six 3-pointers and finished with a game-high 24 points.

“I just want to win a championship with these guys, with this team,” Heslip said. “The first time (in the title game), it was an amazing experience, but now it’s the second time and we’re not just here for the experience. We’re here to perform.”

There may be no hotter team in the country than the Bears, who knocked off TCU in the opening round, survived a tough game with No. 17 Oklahoma in the quarterfinals, and then ran roughshod over the Longhorns in a game that was never really close. Baylor has won 10 of its last 11 games, moving from a precarious place on the NCAA tournament bubble to firmly in the field.

With a victory Saturday night, they may find themselves on a seed line on Selection Sunday that would have seemed impossible in late January, when they were in the midst of a five-game skid.

“We didn’t let it deter us from what we knew we were supposed to do,” Jefferson said of the losing streak. “We stayed together as a team. We didn’t put the blame on anybody, we stuck through it and fought through it and this is where we’ve come.”

While the Bears are seeking their first Big 12 tournament title, the fourth-seeded Cyclones will be trying to end a drought that dates to their only championship in 2000.

They survived a rough-and-tumble affair with Kansas State in the quarterfinals before outscoring No. 10 Kansas 94-83 Friday night, ending a five-game losing streak against the Jayhawks by beating them in Kansas City for the first time since March 10, 1996.

The victory also allowed Iowa State (25-8) to match the 2001 team for the second-most wins in school history, trailing only the 32 wins piled up by the previous year’s team.

Georges Niang will always bear the scars from that fight. He was walloped in the right eye late in Friday night’s game against Kansas, after he had already poured in 25 points, and had to leave the court with a towel pressed against his face to stop the flow of blood.

Five stitches later, he showed up to the postgame press conference.

“We love competing for championships,” Niang said with a smile, a bandage over his eye. “Coach says to take it one day at a time, but the Big 12 championship is one day away from us.”

One day away from the confetti falling, and for both teams a long-awaited trophy presentation.