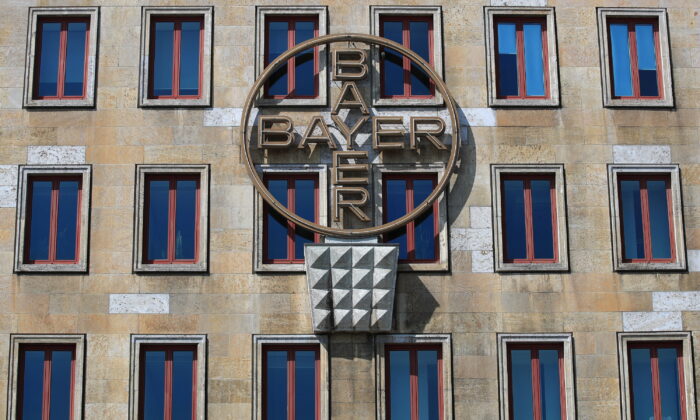 The logo of Bayer AG is pictured on the facade of the historical headquarters of the German pharmaceutical and chemical maker in Leverkusen, Germany, on April 27, 2020. (Wolfgang Rattay/Reuters)
Companies

FRANKFURT, Germany—Agriculture and pharmaceuticals company Bayer on Thursday lifted its 2022 earnings guidance on strong demand from farmers for its seeds and crop chemicals and higher sales of consumer health products.

Bayer is now targeting earnings before interest, taxes, depreciation and amortisation (EBITDA), adjusted for special items, of about 13 billion euros ($13.21 billion), based on June 30 foreign exchange rates, where it had previously predicted about 12 billion euros, it said in a statement.

Bayer, which has been hit by litigation costs over claims that a weedkiller it acquired under its Monsanto takeover causes cancer, said that second-quarter adjusted EBITDA jumped 30 percent to 3.35 billion euros, above an average analyst estimate of 3.28 billion euros posted on the company’s website.

Prices of agricultural commodities, such as corn and soy have surged globally after Russia’s invasion of Ukraine disrupted farming and grain transport there, prompting farmers elsewhere to use more chemicals and seeds to boost output.

The crop science division, which generated the bulk of Bayer’s earnings during the first half of the year, saw adjusted EBITDA surge by more than 70 percent to 1.75 billion euros in the second quarter, beating a market consensus of 1.56 billion euros.

By contrast, a litigation settlement and write-downs resulted in a net loss of almost 300 million euros for the quarter, where analysts had projected a net profit of about 1.5 billion, hit by special charges of 2.1 billion euros.

That included 694 million euros set aside for an expected settlement with the State of Oregon over waste water contaminated with PCB, a chemical Monsanto produced up until 1977.

Other charges included restructuring measures and write-downs on certain assets due to a strong rise in interest rates.

By Ludwig Burger and Patricia Weiss