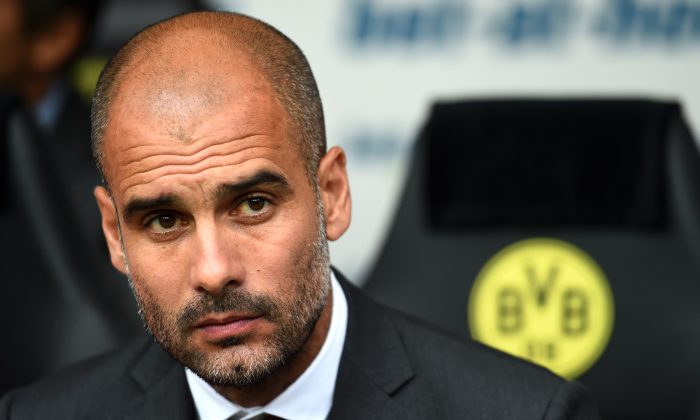 Pep Guardiola the manager of Munich looks on during the DFL Supercup between Borrussia Dortmund and FC Bayern Muenchen at Signal Iduna Park on August 13, 2014 in Dortmund, Germany. (Photo by Lars Baron/Bongarts/Getty Images)
Europe

Bayern Munich will take on Preußen Münster in a German Cup match on Sunday, August 17.

The game will be broadcast on Sky Go in Germany, as well as ESPN UK/HD in the United Kingdom.

The game will also air on ESPN3 in the United States.

Live streaming is available on Watch ESPN (US).

Bayern forward Arjen Robben told fcbayern.de: “They won’t give us anything for nothing, but if we play to our footballing potential we’ll make the next round.”

Coach Pep Guardiola also added that: “anything can happen in the cup.

“If we think simply being Bayern Munich will be enough, it could be dangerous.”

Even though Preußen Münster are a third-tier German league side, Guardiola warned that Bayern “face a third division team and they’re all professionals.”

“And they have superb fans. It’ll be a great atmosphere.”

Guardiola also cautioned that despite having the German World Cup stars only back recently and having Javi Martinez injured, “it’s either in or out” in the German Cup.

“We have to deal with the situation as we find it,” he insisted.

“All we can do is compensate over the next few weeks with mental strength and passion.

“But I’m confident it’ll work out.”