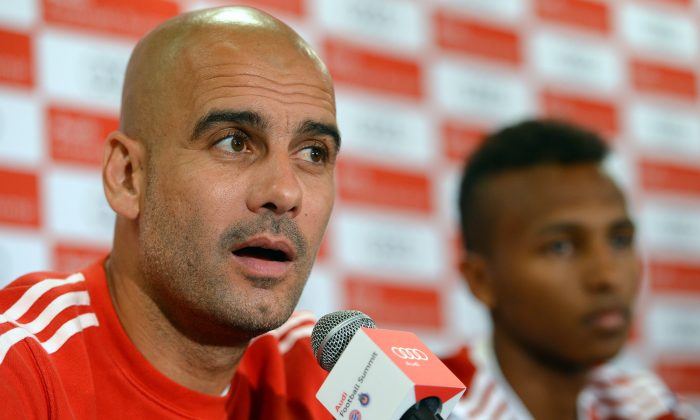 Head coach Josep Guardiola looks on during a press conference at day one of the Audi Summer Tour 2014 at Red Bull Arena on July 30, 2014 in New Jersey, United States. (Photo by Lars Baron/Bongarts/Getty Images)
Soccer

Bayern Munich will take on Chivas Guadalajara in a club friendly match on Thursday, July 31.

The game will be broadcast on UniMás, Univision Deportes USA, and ESPN in the United States, as well as Canal+ Liga / HD, Eurosport 2 Spain, and Canal+ Fútbol / HD in Spain.

The game will also air on SuperSport 3 Africa and SuperSport HD3 Africa in Angola, Cameroon, Ghana, Nigeria, Zambia, and in most African countries.

Bayern Munich is 3/10 to win the match, while Chivas Guadalajara are 12/1 for a win. Odds for a draw are 19/4, according to OddsChecker.

In a press conference, Bayern coach Pep Guardiola said: “We’ve not only come here to enjoy ourselves, we also want to put on a show for the fans.”

“I’m just happy to be here with my team,” Guardiola added.

The Chivas game will be “another good test, so we can see where we stand and where we still have work to do,” Guardiola said.

Although Bayern are still without most of their Germany internationals because they are being rested due to the World Cup, Guardiola said that it is “no excuse” for being unable to perform because “we’re Bayern Munich.”

“I’m certain we’ll have a very good season. It’s not the first time I’ve had to deal with a situation like this”

“I can cope,” Guardiola added.