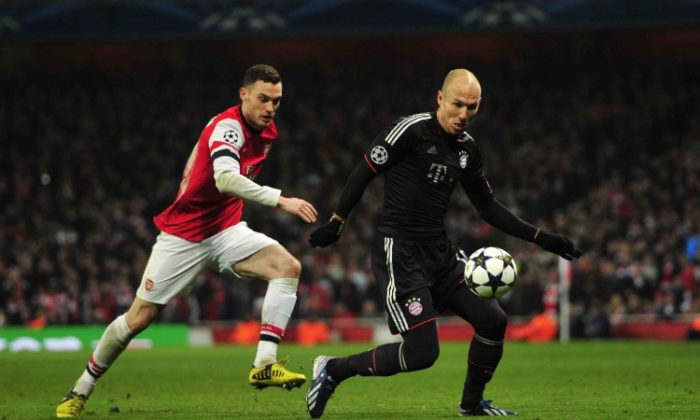 Bayern Munich, the giants of European football that currently lead Germany’s Bundesliga by 15 points, put on a master class at the Emirates in a thoroughly deserved 3–1 victory over Arsenal in Tuesday’s Champions League action.

Tony Kroos set the visitors on their way after only seven minutes and Thomas Muller made it 2–0 before half time. Thanks to the referee and a large slice of luck, Arsenal did manage to pull one back, but a third goal from the visitors 13 minutes before the end put the issue beyond doubt.

Having been humbled at home for the second consecutive match, only the most diehard fan will give the Gunners any chance of turning it around in Munich against opponents of such undoubted quality.

Even before the game started there was something of a crisis mentality around the Emirates after Arsenal’s shock exit from the FA Cup at the hands of Championship side Blackburn Rovers last Saturday. That was not exactly the ideal preparation for an encounter with last season’s Champions League runners-up.

Despite having not won any silverware for eight long years, Wenger is rumored to be on the verge of being offered a new two-year contract. The manager’s pre-match comments were cautious and one had the impression that he was hopeful, rather than genuinely optimistic, that his team could bounce back from the weekend’s setback.

“The players are really hurt, but now you have to take it on the chin and come back with a strong response. That is all we can do,” Wenger said.

Star midfielder Jack Wilshere has been the one shining light in Arsenal’s inconsistent season. The England international suggested that his teammates could draw inspiration from the way Chelsea struggled in the Premier League last season, but still managed to win the Champions League against the odds.

“Chelsea are an inspiration for everyone. They weren’t having a good season and they got a bit lucky in some games but they showed great character and we need to do that,” Wilshere said.

Defender Laurent Koscielny had recovered from a calf injury and partnered German Per Mertesacker at the heart of the Arsenal back line.

With newly signed left-back Nacho Monreal cup-tied and Kieran Gibbs out with a thigh injury, skipper Thomas Vermaelen filled in as a makeshift left back. This was not an ideal situation with the likes of Franck Ribery starting on the right side for the visitors.

Theo Walcott was chosen to lead the attack in preference to Olivier Giroud.

The match began in a surprisingly open fashion with corners at both ends within the first five minutes, but it was the visitors that were the more confident and looked as if they were the ones playing on home turf.

On the seven-minute mark, Ribery found Mario Mandzukic in unfamiliar territory on the right. The big striker delivered a poor cross, which the Arsenal defenders seemed to misjudge.

The ball bounced invitingly in front of Kroos who had made himself a couple of yards of space on the edge of the box, and the German international volleyed his team into the lead.

The shot was executed with superb technique, direction, and real venom. Wojciech Szczesny could only watch it fly past him into the Arsenal goal.

Arsenal did enjoy some possession but their passes were mostly square or backward with zero penetration. Bayern looked by far the more enterprising unit and they deservedly extended their lead on 21 minutes.

Following a Bayern corner, Szczesny pulled off a fine stop from a Daniel van Buyton header, but goal poacher Thomas Muller was on hand to net the rebound from point blank range.

The visitors should have gone three up just before half time but Mandzukic put a free header just the wrong side of the upright.

The Gunners did make a better fight of it in the second period. In addition, they were assisted by a lucky break on 55 minutes when a shot from Santi Cazorla clearly deflected past the goal line off teammate Lukas Podolski, but the referee decided to award a corner to Arsenal.

When the ball came across, Manuel Neuer made an uncharacteristic miscalculation and found himself in no-man’s land without the ball, which bounced up invitingly for ex-Bayern player Podolski to nod in a goal for the Gunners.

Wenger brought on Tomas Rosicky and Olivier Giroud and almost immediately Walcott, now playing out wide, created a chance for the Frenchman.

However, in contrast to Kroos in the first half, Giroud shot straight at Neuer when either side would have produced the equalizer.

Meanwhile, Robben had entered the fray for Bayern. Both he and Gomez, who later replaced Mandzukic, are players with tremendous ability but with a tendency to be selfish at the expense of the team.

There was certainly evidence of this after they came on, but on 77 minutes, Robben resisted the temptation to try something outrageous and slid the ball down the right side of the box to the overlapping Philipp Lahm.

The Bayern captain centered the ball across the 6-yard box just out of Szczesny’s reach to where Mandzukic was closing in attended by Bacary Sagna. It is debatable which of those two got the final touch, but the end result was that Mandzukic was credited with the goal.

It is difficult to see how Arsenal can possibly turn this around in the second leg, although stranger things have happened in football.

More likely is that Bayern will cruise through to the quarterfinals and beyond. The German powerhouse remains many people’s favorite to go all the way to the final for a second year running.