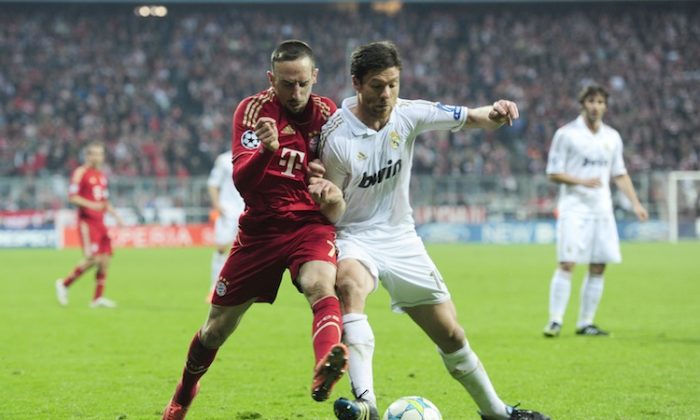 Bayern Munich is one step closer to their dream of playing a UEFA Champions League final on their home ground. A late strike from goal poacher Mario Gomez gave the Germans a 2–1 advantage over Real Madrid to take into the second leg of the tie at the Bernabeu next week.

However, Real boss Jose Mourinho and his team will be delighted with the away goal and must fancy their chances of turning things around on home turf.

Jupp Heynckes, facing the club that he guided to a Champions League triumph in 1997-98, was able to field what is arguably his strongest side with Bastian Schweinsteiger back from injury. German international and World Cup hero Thomas Muller had to make do with a place on the bench.

Mourinho gave preference to Angel Di Maria over unsettled Brazilian star Kaka, and Fabio Coentrao was given the nod to play at left back in place of Marcelo.

This was possibly the Spanish giants’ first genuine test in this year’s competition since their passage to date has been relatively easy. However, their record on the road in Europe against German teams in general, and Bayern in particular, is not at all impressive. Bayern had won eight of the last nine meetings on their home ground with one match drawn.

Notwithstanding their abysmal record in Germany, it was Madrid that created the first chance of this encounter after seven minutes, but Karim Benzema’s shot was pushed over the bar by Bayern keeper Manuel Neuer.

When English referee Howard Webb is in charge of a match, there are usually a few controversial moments, and the first of these came after a quarter of an hour when Franck Ribery went down in the box following a slight tug of his shirt by Sergio Ramos. The English referee was having none of it, despite the Bayern pleas and protestations.

However, the German fans did not have long to wait for a reason to cheer. Just two minutes later, Real failed to clear a corner. With Sergio Ramos notably slow to react, the ball broke to Ribery who drilled a firm low shot past Iker Casillas for the opening goal.

For the remainder of the half, Real never looked convincing and the only chances they had of getting back on level terms were a couple of long-range free kicks. But they were really too far out, and Cristiano Renaldo failed to trouble Neuer with either of them. Overall, Bayern were good value for their half time lead.

Tie in the Balance

After the break, Real continued to look disjointed and passed the ball poorly. Yet the mark of a class outfit is frequently the ability to make something out of nothing, even when they are not playing well.

At the 53-minute mark, a diagonal ball across the box from Benzema was brilliantly kept from crossing the byline by Ronaldo and flicked back in front of goal all in one movement. Neuer was on the ground and completely unable to stop, ironically, the German Mesut Ozil tapping the ball home to bring the visitors level.

As the match wore on it appeared that Real might come away with an unlikely draw as Gomez uncharacteristically squandered several opportunities to put Bayern ahead.

The striker also had a penalty shout turned down by Webb. But it was indeed Gomez who finally came up with goods with just a minute left on the clock. Bayern skipper Philip Lahm made a foray down the right flank and rifled in a low cross.

No prizes for guessing who was waiting in the six-yard box ahead of his marker to slide the ball home.

Heynckes’ verdict was clear and to the point as reported by the BBC, “I think we more than deserved the win because we played cleverly and intelligently.”

It has been a golden season for Gomez who has scored a hat full of vital goals for his team. This one may well prove to be the most important of all. All eagerly await next week’s return leg in Madrid.