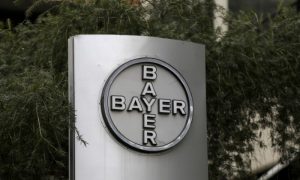 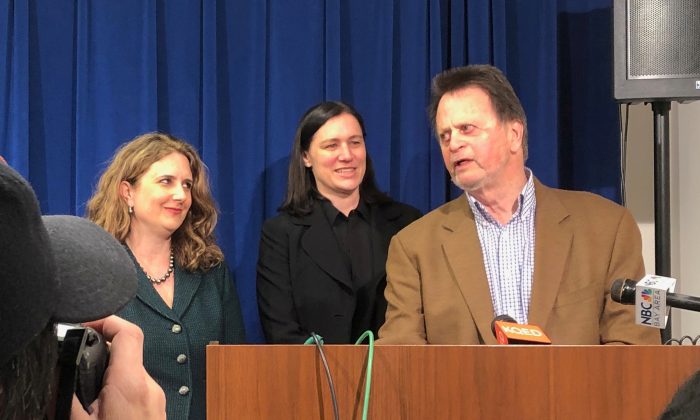 Edwin Hardeman (R), with his attorneys Jennifer Moore (L) and Aimee Wagstaff, speaks to the media, after Bayer AG was found liable for Hardeman’s non-Hodgkin’s lymphoma arising from his use of the company’s weed killer Roundup, at the Federal court in San Francisco, California, U.S., March 27, 2019. REUTERS/Alexandria Sage
US News

FRANKFURT—Bayer AG shares sank to their lowest in almost seven years on March 28 after a U.S. jury awarded $80 million to a man who claimed use of the group’s weed killer Roundup caused his cancer, with thousands of similar lawsuits looming.

The jury in San Francisco federal court on March 27 found Bayer liable because its Monsanto unit did not warn plaintiff Edwin Hardeman of the herbicide’s alleged cancer risks.

Its shares were down 1.3 percent at 55.59 euros at 10.23 a.m. GMT (6.23 a.m. EDT). That added to last week’s 9.6 percent plunge after the jury concluded part-way into the trial that there was a causal link between the weedkiller and Hardeman’s disease.

The steep, steady slide since the first adverse verdict in a Roundup lawsuit in August 2018 has pushed Bayer’s value down to about 52 billion euros ($58 billion), which is several billion dollars less than what the drugs and crop chemicals group paid to acquire Monsanto in 2016.

The trial is only the second of more than 11,200 Roundup lawsuits set to go to trial in the United States.

In the first trial, a California man was awarded damages by a jury in state court in August, which were later reduced to $78 million from an original $289 million that Monsanto sought to throw out. The case is on appeal.

A third Roundup trial, handled by the same plaintiff lawyers who won the August verdict, is scheduled to start in California’s Superior Court in Oakland on March 28.

It was brought by California couple Alva and Alberta Pilliod who were diagnosed with non-Hodgkin’s lymphoma in 2011 and 2015 respectively. They allege their decades-long use of Roundup caused their cancers.

Analysts at JP Morgan and Liberum said Bayer’s stock price shows the market expects an eventual settlement of up to 20 billion euros or 40 billion euros. They said that was overly pessimistic and they expected the final amount to be “substantially lower” than that.

“Even if Monsanto/Bayer may win some cases, there is great uncertainty about the number of victories and defeats. That is why we expect Bayer to try to settle the remaining cases,” said Bryan Garnier analyst Jean-Jacques Le Fur.

Peter Verdult, an analyst at Citigroup, said more focus should be paid to trials later in the year outside of California to better determine settlement estimates. At least two trials are scheduled to take place in St. Louis, Missouri state court this fall.

Hardeman’s case was considered a bellwether trial to help determine the range of damages and define settlement options for the more than 760 other federal cases pending in the same court before U.S. District Judge Vince Chhabria. Other cases will be heard in state courts.

“This verdict does not change the weight of over four decades of extensive science and the conclusions of regulators worldwide that support the safety of our glyphosate-based herbicides and that they are not carcinogenic,” Bayer said.

Monsanto’s Roundup was the first to contain glyphosate, the world’s most widely used weed killer. But it is no longer patent-protected and many other versions are available.

Bayer does not provide sales figures for the product and analysts no longer deem it a major profit driver.