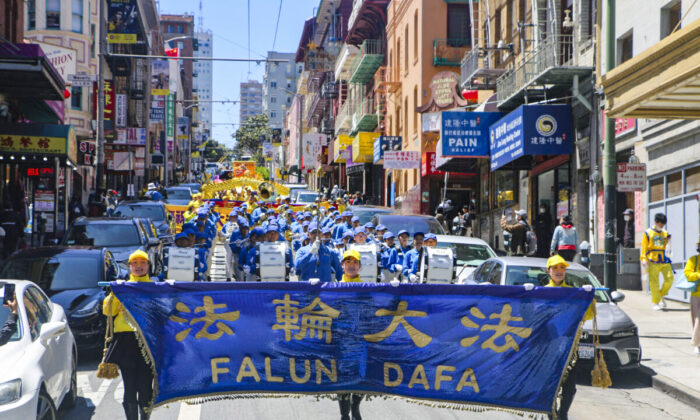 The Tian Guo Marching Band leads a parade commemorating the 30th anniversary of the public introduction of Falun Dafa in San Francisco on May 7, 2022. (Ilene Eng/The Epoch Times)
Northern California

SAN FRANCISCO—Hundreds of Falun Gong adherents commemorated the 30th anniversary of the founding of the spiritual practice with a parade in San Francisco on May 7.

Linda Campbell, who is from the North Bay, has been practicing for 14 years. She used to get colds and flus often, but after practicing, she is much healthier.

“I look at it as a time of gratitude, as a time to just remember just how wonderful it is that [Falun Dafa’s founder, Li Hongzhi,] brought this practice to the public so that we could all benefit from it,” Campbell said.

She said when she sees disagreements in her workplace, instead of blaming others, she stops to think about whether it has something to do with her. Because she reflects and thinks about how to improve herself, her surroundings have become more peaceful.

“It has made me a happier person, and I think it has grounded me in an understanding of what it means to have strong values. Not just to do things because they’re right or wrong, but why they are,” said Campbell.

Falun Gong, also known as Falun Dafa, teaches the principles of truthfulness, compassion, and forbearance. The meditation practice was introduced to the public in China in 1992. Due to its many health benefits, the practice exploded in popularity through word of mouth in a short period of time.

Then in July 1999, the Chinese Communist Party began to persecute Falun Gong practitioners, imprisoning and torturing those who refuse to renounce their faith.

In addition to celebrating the day, Campbell and other practitioners are raising awareness about what’s happening in China today.

“In China, people don’t have the benefit or the freedom of being able to be in parades, being able to talk to other people about this practice openly and freely. Being a person who grew up here in the United States, this is something I’ve always taken for granted,” Campbell said. “It’s just my time to be able to step forward and to be able to share and help them out in whatever little way that I can.”

“I came upon some information … that said bad things about Dafa. I later found out that those websites were put up by the … communist government,” he said.

He started hearing about the practice in the news and decided to learn more about it.

“I read [the book] Zhuan Falun and then I realized, wait, this is nothing like what they’re saying. It’s a really good practice, and I want to start learning it,” Gonzalez said. “I started learning the exercises, reading the book, and I’ve been practicing ever since.”

Gonzalez said he used to be very angry and resentful, but now he treats everyone with compassion and goes with the flow.

“Every time I do anything now, either at work or in my personal life, I always reflect back on it now. And I realize, what I can do better, how can I be more kind, and how I can be a better person,” he said.

During the parade, many onlookers stopped to watch and appreciated the colors and messages of the banners.

It’s “really nice to see a peaceful demonstration, but also with some real underlying concerns about what’s happening in China,” said Barbara Shaw, a visitor from England. “I feel that we need to spread that word … so that people are aware.”

Shaw saw the parade while visiting San Francisco with her friend Carol Comely, also from England. They’re looking forward to sharing the information with friends and colleagues back home.

Some passersby said they were already aware of the persecution in China.

“I think we need to take stronger action and support the rights of people to have religious freedom in China. Everything I understand about Falun Gong is that it’s a very peaceful religion. It focuses on benevolence,” said Joni Huffman, a visitor from Colorado.

Similarly, Joe Banasiak, a visitor from the United Kingdom, said he first learned about Falun Gong through hearing about the persecution happening at the hands of the Chinese Communist Party (CCP). He said the Saturday parade and meditation demonstration allowed him to learn more about the practice and values Falun Gong practitioners live by.

“It’s all about truthfulness, mindfulness, and all about compassion and looking after your fellow person. So, just spiritually calming yourself down,” Banasiak said. “I hope that eventually you guys will be able to practice without any persecution across the whole world.”

Joann Tippett, a health care practitioner from the East Bay, was shopping at the farmers market and stopped to watch the large group of people meditating.

“This is something that’s on a much broader scale,” Tippett said. “It is a matter of how it really impacts China and just the Chinese community at large. It just has me kind of fascinated.”

Donna Lawson, from Vallejo, is aware that the group is discriminated against in China. It’s her first time seeing a celebration in San Francisco.

“I think it’s a very happy event. And I love music. I love bands. I can’t think of a better way to express your joy and your principles but through music,” Lawson said. “I think it’s always important to be in the public, to let the community know who you are, and what you stand for, and always the truth. The truth is so important to me.”