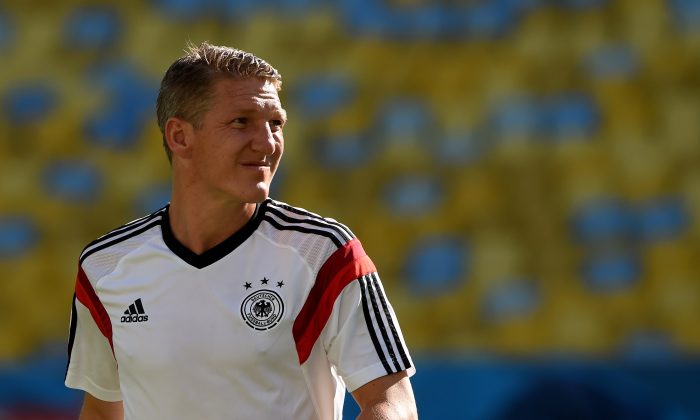 Germany's midfielder Bastian Schweinsteiger looks on during a training session at The Maracana Stadium in Rio de Janeiro on July 3, 2014, ahead of their match against France in the quarter-finals of the 2014 FIFA World Cup on July 4. (PATRIK STOLLARZ/AFP/Getty Images)
Soccer

Bastian Schweinsteiger Salary, Net Worth: How Much Does Bayern Munich, Germany Midfielder Make?

How much does Bastian Schweinsteiger make?

The 29-year-old Bayern Munich midfielder began his senior career with the Bavarian giants in 2002.

Schweinsteiger originally played on either the right or left wing in midfield, and was converted into a central midfielder in 2009 by then Bayern Munich manager Louis van Gaal.

Since then, the gifted right footed player has been used by various Bayern coaches and in the German national side as a holding midfielder or a slightly advanced central midfielder.

According to CelebrityNetworth.com, Schweinsteiger earns $14 million annually, and has an estimated net worth of $50 million.