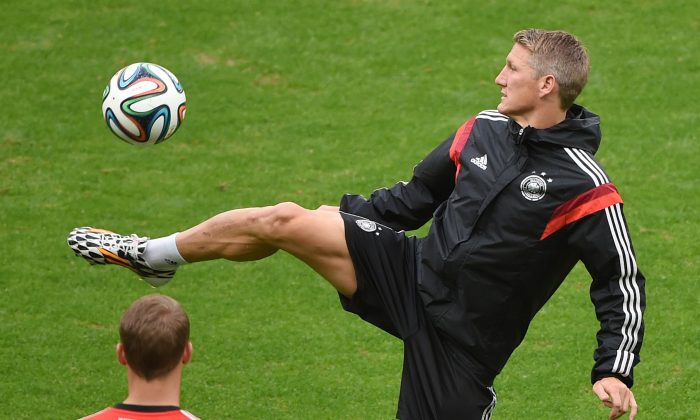 Germany's midfielder Bastian Schweinsteiger warms up warms up during a training session in the Beira-Rio Stadium in Porto Alegre on June 29, 2014 on the eve of their Round of 16 football match between Germany and Algeria during the 2014 FIFA World Cup. (PATRIK STOLLARZ/AFP/Getty Images)
Soccer

Bastian Schweinsteiger should be fit to face Algeria.

The 29-year-old Bayern Munich man suffered from knee inflammation earlier in the month, and was sent to a hospital by helicopter to have a knee scan.

Schweinsteiger missed out on Germany’s opening match against Portugal on June 16, but made substitute appearances against Ghana and the United States.

Whether he will feature in the starting line up is another question, as Schweinsteiger’s preferred central midfield positions are currently being occupied by Philipp Lahm and Sami Khedira.

“Schweini” has played well in his cameo appearances so far, however, and has made a strong argument to get himself restored to the starting line up.