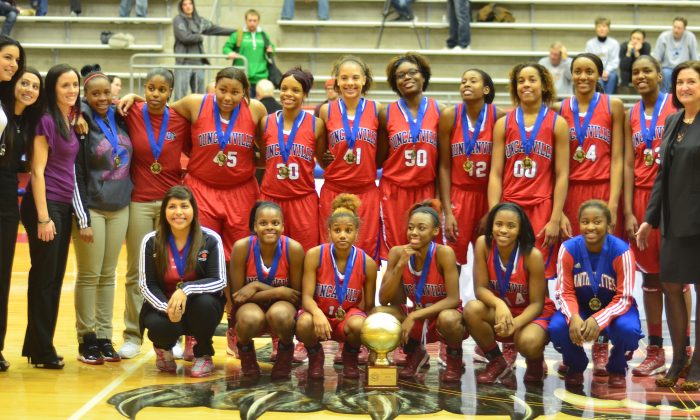 The presents have been opened, kitchen cleaned after a well prepared meal, and the relatives have all left. Now it is time for some girls’ high school basketball.

The annual Sandra Meadows Classic on December 26-28 awaits your attendance featuring teams from across America. For less cost than a #1 meal with extra meat at Whataburger, you can watch some of the finest high school girls basketball in the land. Five states are represented in the 32-team tournament.

“This is probably the strongest and most competitive teams that we have had in the 10 years as the Tournament Director,” said Steve Martin. When pressed about some teams that never return, he just smiles and says, “Some of the top teams in the state didn’t want to come back. I think maybe because of the competition.”

The Tournament left Fair Park in 1951. Martin and the Duncanville Lions Club inherited the Tournament. Under Martin’s tutelage, attendance has grown as well as the participant quality. The cost is $100 per team to cover referee cost. “We are not here to make a profit, rather to provide the best girls high school basketball available. I would put the caliber of competitiveness in the SM Classic up against any tournament in the nation,” Martin concluded.

Everyone knows the team to beat in the tournament is the host Duncanville girls’ team. Duncanville Coach Cathy Self-Morgan may well be the finest high school girl’s basketball coach in the country. Self-Morgan came to Duncanville 14 years ago. Her credentials were and are impressive. Her career win-loss record is 959-199 for an 83% win- record. She won three state championships at 5A West Lake before coming to Duncanville. She led the Pantherettes to state championships in 2003, 2012 and 2013. The Pantherettes tend to be the perennial winner of the tournament. Self-Morgan has an 84 straight wins and if she wins the tournament the record the streak will hit 89. The games that are left in the regular season are against teams she has already defeated this year. She should win her 100th consecutive game without a loss by the middle of February.

Some say that this event could be a rematch of Duncanville vs. Manvel in the finals like at the Pasadena McDonalds Tournament which Duncanville won. Yet Duncanville has won the tournament for the last two years.

San Antonio S.A. Brennan and McKinney North are ranked #1 and #3 in state 4A ranking- Vista Ridge is ranked #9.

This Thursday at 9 A.M. it all starts. Duncanville takes on TABC #25 Richardson. Folks, it can’t get any better that this.