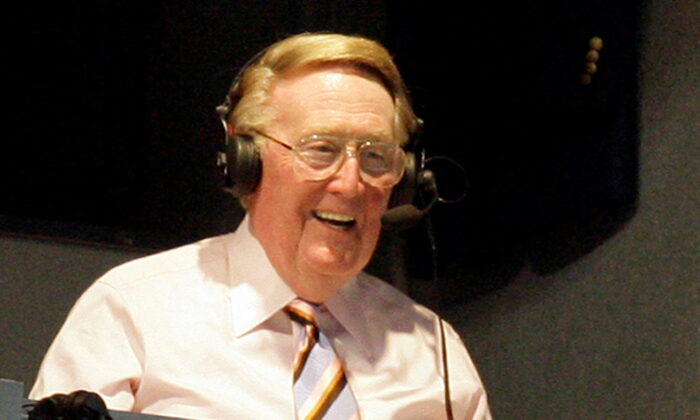 LOS ANGELES—Vin Scully, one of baseball’s most revered broadcasters who called Dodgers’ games for a record-breaking 67 years and narrated some of the sport’s greatest moments, died on Tuesday at the age of 94, the team announced.

Scully joined the Dodgers’ broadcast crew in 1950 when the club still played in Brooklyn. He followed the team to Los Angeles in 1958, where for generations of Southern California fans he was “the soundtrack to summer,” personifying “Dodger baseball” more than any player.

He also attracted a national following as the voice of NBC’s baseball “Game of the Week” and broadcast numerous World Series.

In October 2016, when at age 88 he left the Dodgers booth, long since named in his honor, he completed the longest tenure with one team of any professional sports broadcaster.

In his final games, he was celebrated by the Dodgers at an emotional farewell ceremony, hailed as a “national treasure” by the U.S. Congress and the national media, and saluted by fans and players alike with standing ovations.

Shortly after his retirement, he received the Presidential Medal of Freedom, the highest civilian honor, at a White House ceremony.

Known for his “golden voice,” articulate phrasing, and rich knowledge of the game, Scully announced some of the most historic games in baseball in language almost as memorable as the events he was describing.

“In a year that has been so improbable, the impossible has happened,” Scully declared in the moments after a limping Kirk Gibson homered to win Game One of the 1988 World Series for the Dodgers.

“There’s 29,000 people in the ballpark and a million butterflies,” Scully said as he set the scene for the climax of Sandy Koufax’s September 1965 perfect game against the Chicago Cubs.

Many commentators view Scully’s call of the game’s final inning as worthy of the top ranks of baseball literature.

“You’re the patron saint of all baseball announcers,” New York Yankees’ announcer Michael Kay told Scully as he interviewed him in 2013. “All we do is want to be you.”

The tall, red-haired Scully was born in New York City on Nov. 29, 1927, and attended Fordham University in the Bronx. He joined the Brooklyn Dodgers’ broadcasting team at storied Ebbets Field in 1950, apprenticing with famed play-by-play announcer Red Barber.

From Barber, he learned the power of precise, colorful language and the value of describing the action objectively rather than following the custom of many other announcers in openly rooting for the home team.

“Brooklyn and the Dodgers meant more to Red Barber than to almost anyone,” Scully said in his interview with Kay. “But on the mike, he was always objective, always fair. Barber has been the big influence in my life.”

Scully was not yet 26 when he took the helm in the booth for the Dodgers in the 1953 World Series after Barber bowed out because of a dispute over his fee. The next season, Scully became the team’s lead play-by-play man as Barber moved to the New York Yankees.

The Dodgers of that era, immortalized by writer Roger Kahn as “The Boys of Summer,” featured such greats as Jackie Robinson, who broke baseball’s color bar, Duke Snider, Pee Wee Reese, and Roy Campanella.

Scully was on the air in 1955 when the team won its only World Series in Brooklyn after several agonizing Fall Classic losses to the Yankees.

The following year, Scully did the television play-by-play for the last half of what is still the only perfect game in World Series history, pitched by Yankee Don Larsen against the Dodgers.

Although he later criticized his description of the game as being overly dry, Scully can be heard on the preserved television broadcast telling viewers: “Let’s all take a deep breath as we go to the most dramatic ninth inning in the history of baseball. I’m going to sit back, light up, and hope I don’t chew the cigarette to pieces.”

But it was the Dodgers’ move west after the 1957 season that propelled Scully into the ranks of the game’s biggest announcers.

“It’s time for Dodger baseball” became Scully’s signature greeting to viewers and listeners before every game.

His voice became indelibly linked to the team from its very beginnings on the West Coast when the Dodgers played in the cavernous Los Angeles Coliseum while their own park was being built.

Fans, straining to follow the action in the Coliseum’s vast expanses, began bringing transistor radios to hear Scully’s play-by-play, a practice they carried to Dodger Stadium when it opened in 1962.

The 1960s Dodgers were wildly popular with their fans and were among baseball’s best teams, led by Hall of Fame pitchers Koufax and Don Drysdale, and record-breaking base-stealer Maury Wills, of whom Scully once said: “When he runs, it’s all downhill.”

But it was Scully —not the athletes performing such feats—who was voted “the most memorable personality in Los Angeles Dodger history” by the club’s fans in 1976.

In the 1970s, Scully also became a fixture in national sports broadcasts, calling National Football League games and PGA golf for CBS-TV from 1975–1982, baseball’s “Game of the Week” on NBC television from 1983–1989, and CBS radio broadcasts of the World Series from 1990–1997.

He scaled back his broadcast schedule in his final years with the team to announce only home games or those in Western states. But his presence was deeply felt by Dodgers fans.

As waves of adulation engulfed him at the Dodgers’ farewell ceremony for him, Scully credited the fans as his inspiration.

“When you roar, when you cheer, when you are thrilled, for a brief moment, I am eight-years-old again.”

Scully, who passed away at his home in Hidden Hills, leaves behind five children—Kevin, Todd, Erin, Kelly, and Catherine, 21 grandchildren and six great-grandchildren.