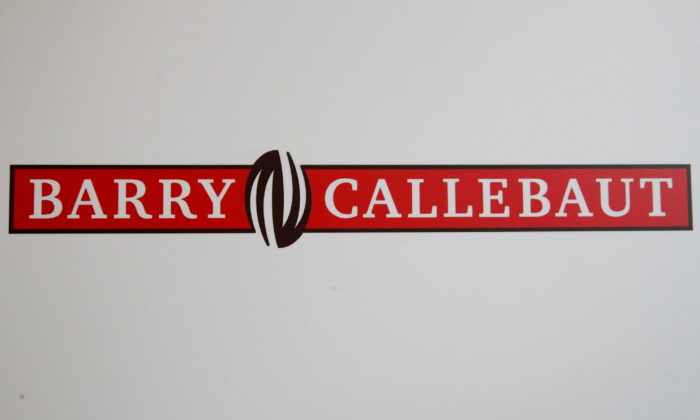 The logo of chocolate and cocoa product maker Barry Callebaut is pictured during the company's annual news conference in Zurich, Switzerland, on Nov. 7, 2018. (Arnd Wiegmann/Reuters)
Companies

ZURICH—Swiss chocolate maker Barry Callebaut will keep operating in Russia to help customers and employees there, even though images from the war in Ukraine create “enormous pressure,” it said on Wednesday.

Shares in the Zurich based-group fell more than 5 percent as some analysts worried about its—albeit small—exposure to the turbulent Russian market, as well as flattish first-half earnings per ton of chocolate sold.

The company reported higher first-half profits and sales volumes overall, helped by a recovery in the global chocolate market. But Moscow’s invasion of Ukraine has forced all consumer goods companies with a presence in Russia to rethink strategies.

“We are under enormous pressure just watching the images we get from the war and we cannot not look into the boardroom of other companies,” Chief Executive Peter Boone told reporters.

He said the question of whether to stay in Russia was raised “internally and externally” and even by his children, but it was important to protect the jobs of staff in Russia.

“It feels right because we are in contact with our 500 colleagues in Russia, they clearly have not asked for this decision by the Russian government. For us, it feels like the right thing to do to stay close for our employees and our customers,” he said, adding the company’s chocolate and cocoa went into all kinds of products including drinks and breakfast cereals.

He said the business in Russia—the fourth-largest chocolate confectionery market, according to Euromonitor—represented less than 5 percent of group volumes and the company was taking a 5 million Swiss franc ($5.4 million) impairment to reflect the increased risk of customer default there. It has also stopped new capital investment in the country.

Shares in the group were down 5.7 percent at 11:23 GMT, underperforming the European food sector index.

“The exposure to Russia with close to 5 percent of the group’s volume as well as the flattish EBIT per ton despite strong volume growth could partly explain the share price drop,” Vontobel analyst Jean-Philippe Bertschy said in an emailed comment.

Boone said it was difficult to get raw materials to Russia, but still possible as food is not covered by Western sanctions.

The company confirmed its goals for 5-7 percent sales volume growth and earnings before interest and tax above volume growth for the three years to August 2023.

Strong chocolate sales and a recovery in its gourmet business with restaurants helped sales volumes rise 8.7 percent in the six months to the end of February. Net profit climbed 3.1 percent.