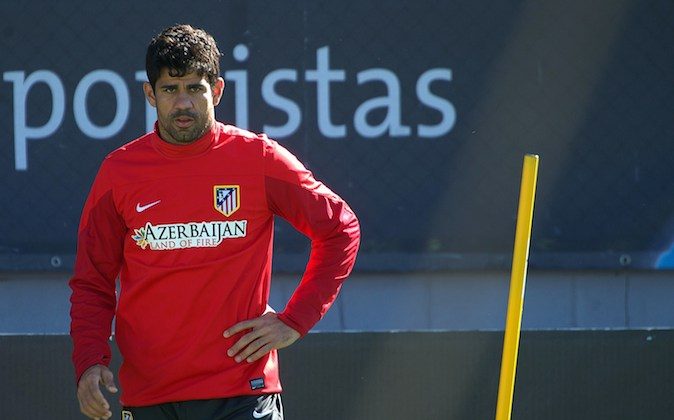 Atletico Madrid's Brazilian-born forward Diego da Silva Costa looks on during a training session at El Cerro del Espino stadium in Majadahonda on May 16, 2014. Barcelona and Atletico Madrid meet for the sixth time this season on May 17, 2014 in a meeting that will decide the La Liga title. (CURTO DE LA TORRE/AFP/Getty Images)
Soccer

The Barcelona vs Atletico Madrid La Liga match is set for Saturday, May 17.

The game will be broadcast on Canal+ Liga / HD, Canal+ Yomvi, and GOL T in Spain.

MADRID— Atletico Madrid coach Diego Simeone says striker Diego Costa has recovered from a hamstring injury and will start against Barcelona on Saturday in the Spanish league title decider.

Costa missed Sunday’s 1-1 draw against Malaga but will return with Atletico on the verge of winning its first league title in 18 years.

Simeone says “he’s well. He trained without any problems and tomorrow he’ll start.”

Spanish leader Atletico can secure the title with a draw at the Camp Nou. Barcelona needs a victory to retain the championship.

In five meetings already this season, Atletico has one win and four draws against Barcelona, but Simeone says “this will be the most complicated game we’ve played against them.”

AP preview of the match.

MADRID— Atletico Madrid face Barcelona at the Camp Nou with both teams vying for the Spanish league title.

Atletico leads Barcelona by three points in the standings, and only victory will see defending champion Barcelona lift their fifth trophy in six seasons and deny Atletico its first league championship in 18 years.

Atletico knows a draw will suffice in winning its first league title since 1996.

Four out of five matches between the sides have ended in a draw this season, with Atletico claiming a narrow 1-0 win in the second leg of their Champions League quarterfinal.

Here are five things to know about Saturday’s game:

Saturday’s matchup is only the third time in league history the title has been decided in circumstances such as these.

And both Atletico and Barcelona were involved then too.

Atletico edged Sevilla in a final round decider to close the 1950/51 season — five years after Sevilla emerged triumphant against Barcelona in a similar showdown.

“We can’t look to the past, we need to focus on the present,” Atletico captain Gabi Fernandez said. “We have a historic opportunity to win the league and the Champions League also.”

Atletico, which plays Real Madrid in the Champions League final on May 24, hasn’t competed for the title since its league-cup double triumph in 1995/96.

Atletico is on the cusp of becoming the first winner besides Barcelona or Real Madrid to win the title since Valencia did it in 2004.

“Whoever manages to distance themselves from all the talk off the field in the buildup will have a better game,” said Atletico coach Diego Simoene, who is likely to wait until game time to decide on the availability of injured striker Diego Costa.

“It would be brutal if we manage to win this league on the last day at home,” Iniesta said. “We would celebrate like never before.”

You would hardly think Barcelona was still in the fight for the title after a look at its recent results.

It has drawn its last two matches against relegation-threatened opponents and, in-between those results, organized a team barbecue that looked more like an end-of-season, summer send-off.

“No one would have thought we’d have this opportunity again after we drew at home to Getafe, you’d be crazy to think it,” midfielder Xavi Hernandez.

“Why wouldn’t we deserve the league,” midfielder Andres Iniesta said.

Barcelona is still waiting on the fitness of defenders Gerard Pique and Jordi Alba, while question marks remain over Neymar’s return with the Brazil striker having been sidelined nearly one month, and this would be his last club game before preparing for the World Cup.

Win or lose the league, coach Gerardo Martino’s future with Barcelona does not look bright.

The Argentine coach has had to put up with reports about his future all season long, and even if he manages to steer the club to victory on Saturday it likely won’t stop the apparent arrival of Celta Vigo coach and former player Luis Enrique from taking over his job next season.

Martino’s reported exit won’t be the only one: Barcelona will be saying goodbye to many of the core players that shaped the club over recent years with Carles Puyol and Victor Valdes exiting. Meanwhile, Daniel Alves and Javier Mascherano are some of the players whose futures may also be away from the Catalan club next season.

While Atletico and Barcelona play for the title, five teams at the other of the table will be playing for survival.

Almeria, Getafe, Granada, Osasuna, and Real Valladolid are all flirting with the second division, with two of them certain to drop alongside last-place Real Betis. Valladolid hosts Granada while Betis is at Osasuna.

Also, Real Madrid’s last match ahead of the Champions League final in Lisbon is Saturday against Espanyol as it finishes the season third in the standings.