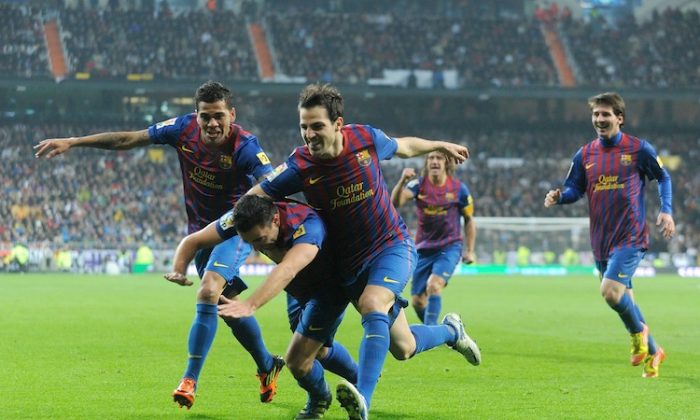 Barcelona No. 1 in Spain After Downing Real Madrid

Barcelona came up with another championship-caliber performance, beating Real Madrid at the Bernabeu 3–1 Saturday night after falling behind with only 21 seconds gone. With the win, Barcelona took over first place in Spain from their arch rivals.

The biggest football match of the weekend in Europe featured the two best sides in Europe in “El Clasico”—Real Madrid at home to Barcelona. This battle wasn’t for a trophy—it was just a match in Spanish La Liga play, but make no mistake, this match had more hype surrounding it than many with a trophies on the line.

Victor Valdes, perhaps overawed by the occasion, played an extremely poor pass that was intercepted by Angel Di Maria. Di Maria’s pass was deflected by Barcelona’s surprised defense and soon after French striker Karim Benzema easily poked it past the careless Valdes.

Twenty-one seconds in and the home side in white was up 1–0. Real Madrid could not have asked for a better start in front of their home crowd.

A few minutes later, Lionel Messi drove toward the Real Madrid net after Sergio Ramos slipped on the soaked pitch. His left-footer was well saved by Iker Casillas.

There was going to be no cagey, careful start to this El Clasico. Sometimes big matches like these need a goal to get going, but this one wouldn’t be suffering from that problem with the start we witnessed.

In the 25th minute, Cristiano Ronaldo ran onto a clever pass from Benzema and had a clear shot on net. Ronaldo’s shot went horribly wide. One couldn’t blame him for shooting, given who he is, but Di Maria was wide open on the right.

Alexis Sanchez powered one in at the far side of the net in the 30th minute after Messi did all the hard work to set him up with another one of his weaving runs through the center of the park. The visitors started taking control of possession and the game started to take on the expected pattern of Real Madrid counterattacking against the controlled passing game of Barcelona.

Early in the second half, Barcelona got their share of good luck. Xavi showed his terrific technique in volleying a high ball hard towards net. The shot took an unbelievable deflection off defender Marcelo and went past the helpless Casillas.

Barcelona was deservedly up 2–1 and in charge of the match; however, Real Madrid was always going to be dangerous on the counterattack.

But unfortunately for the home crowd, Real Madrid superstar Ronaldo was having an off-day finishing chances. After his miss with the right foot in the first half, he missed a wide open header as Barcelona’s defense was caught out of position.

Barcelona didn’t need any more encouragement and, as Madrid sagged after that Ronaldo miss, right full back Dani Alves drove deep into enemy territory and sent a cross to the far post which Cesc Fabregas converted with a diving header. The former Arsenal skipper made a terrific run to the far post from his midfield position to get the goal.

Real Madrid’s players had started to show their frustration after falling behind with Lass, Pepe, and Sergio Ramos all booked for bad fouls. Memories of the ill-tempered matches between the two Spanish giants from last spring started to return.

The win was essentially a must for Barcelona having dropped more points than Real Madrid and facing a trip to Asia to play in the FIFA Club World Cup. Had they lost, they’d have fallen six points behind Real Madrid with one fewer match remaining to be played.

The top of the Spanish La Liga table never could be truly trusted until Barcelona played Real Madrid. In the end, Barcelona proved they have a bit too much class and skill for Real Madrid’s expensive squad.