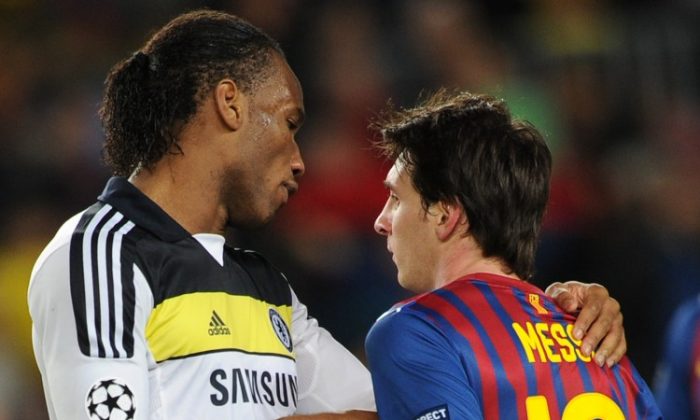 Having almost certainly lost their domestic crown to bitter rivals Real Madrid after a 2–1 loss at home on Saturday, the Catalan giants failed to dispose of a heroic 10-man Chelsea side. They crashed out of the UEFA Champions League following a 2–2 draw with Chelsea in the semifinal second leg at the Nou Camp on Tuesday.

England’s representatives in the Champions League semifinal were reduced to 10 men after captain John Terry received his marching orders for an off-the-ball knee in the back to Alexis Sanchez at the 37-minute mark. Two minutes earlier, Barcelona had gone ahead through Sergio Busquets, and when they added a second a few minutes later the writing looked to be on the wall for Chelsea.

Yet Ramires grabbed that all-important away goal in first half stoppage time, which really gave his team the heart to fight all the way to the end.

The surprising Barcelona team news prior to kick-off was that Gerard Pique would be restored to a three-man back line, and Isaac Cuenca was selected to play up front with Lionel Messi and Alexis Sanchez. Dani Alves and Adriano were the players relegated to the bench.

Notwithstanding the setback loss to Real Madrid on the weekend, Barcelona had to be confident going into this one. The club had gone 15 Champions League home games without defeat stretching back to 2009, and the loss to Madrid was their first setback at home in 54.

Lionel Messi had never scored against Chelsea in seven games and the little maestro spurned an early chance in the third minute when he sliced a shot into the side netting.
It was a chance he would normally have taken and therefore a good omen for Chelsea. However, the visitors received a very early setback when central defender Gary Cahill slipped and overstretched a hamstring. He could not continue, so Branislav Ivanovic had to move inside with Jose Bosingwa coming off the bench to fill in at right back.

Ten minutes later there was an injury drama at the other end when Victor Valdes, Gerard Pique, and Didier Drogba all contested a long clearance by Petr Cech. In a sickening clash, the hip of Valdes crashed into the side of Pique’s head.

The Barcelona defender tried to continue but was clearly groggy and had to make way for Dani Alves shortly afterwards.

All of this was going on while Barcelona laid siege to the Chelsea goal, and the home side finally got the reward they deserved on 35 minutes.

Cesc Fabregas won a corner. Xavi’s kick was only partially cleared by the Chelsea defense and Dani Alves picked up the loose ball just outside the area. He played it through to Cuenca who feigned a shot, then squared the ball to Sergio Busquets who did the business. Cech was out of position and on the ground attempting to save the strike from Cuenca that never came.

Two minutes later, with his side already up against it, John Terry had his moment of madness. His knee in the back of Sanchez could hardly be called violent and so Chelsea fans will argue that a yellow card would have been the appropriate punishment.

However, it was off the ball and undeniably spiteful, so it is not surprising that Turkish referee Cuneyt Cakir opted to administer a straight red. The Chelsea defense was now in tatters and it looked to be only a matter of time before Barcelona extended their lead on the night.

This they did on 43 minutes when Raul Meireles gave the ball away in midfield. Messi broke through, passed to Andres Iniesta who slotted the ball crisply past Cech to put his team ahead on the night and in the tie.

Showing tremendous spirit, Chelsea amazingly manufactured a lifeline in first half stoppage time. An inspired pass from Frank Lampard found Ramires in space just outside the box with Valdes of his line. The Brazilian duly executed the most delightful chip over the Barcelona keeper and into the net to snare that precious away goal.

Despite the Chelsea goal it seemed impossible that they could survive for the entire second period. The half was only three minutes old when Fabregas went down in the area under a typical striker’s clumsy challenge from Drogba. Unbelievably, Messi still couldn’t open his account against Chelsea as his spot kick crashed against the bar.

Most of the next 40 minutes was one-way traffic, although Drogba did force Valdes to scramble a save with a speculative shot from almost halfway, having spotted the Barcelona keeper again off his line.

When Barcelona finally did get the ball in the net at the 82-minute mark it was disallowed for offside. Just a minute later the breakthrough seemed to have finally arrived when Messi found a yard of space and unleashed a fierce drive, but somehow Cech managed to get his fingertips to it and the ball cannoned back off the upright.

With the game in stoppage time the tie was finally decided beyond dispute. Yet another hoofed Chelsea clearance fell to substitute Fernando Torres just inside the Barcelona half. Having committed virtually everyone forward in a last gasp attempt, there was no Barcelona defender able to catch the Spanish striker who held his nerve, rounded Valdes and stroked the ball home.

By no stretch of the imagination could anyone say that the best team won this tie. What it was is a huge testament to how Di Matteo has transformed his Chelsea side. It was a fighting spirit, grit and determination, and “never say die” attitude that was so evident over both legs of this epic semifinal and so conspicuously absent from the team earlier in the season.

Petr Cech said in an interview on ESPN after the game that it was “fantastic what we’ve done. Everyone played 150 percent for the team” and that just about sums it up. The only downside for Chelsea is that John Terry’s red card, and yellows for Meireles, Ramires, and Ivanovic means that all three will be unavailable for the final.

Purists will no doubt feel that it is a travesty that the word’s best footballing side will not grace next month’s Champions League Final. Yet it is those heroic performances against the odds by an underdog that make football the most fascinating of all sports.

At the end of the day it’s about who can put the ball in the net and, as the old saying goes: “whose name is on the Cup.” Surely, Di Matteo deserves to be appointed Chelsea manager on a permanent basis on the evidence of what he has achieved thus far, regardless of what happens in the final.