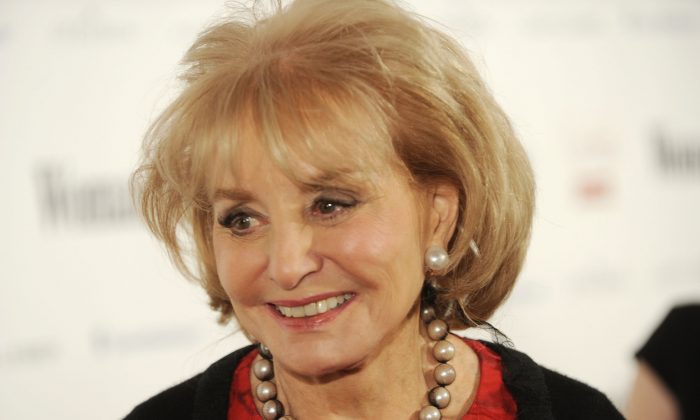 After a decades-long career through which she has had exclusive interviews with some of the world’s most famous and powerful people, Barbara Walters will announce her retirement on The View Monday morning.

“The grandeur, and the tragedy, and the accomplishments of history,” Walters said in a 2000 interview with Archive of American Television’s Don Carleton, reflecting on the people she has interviewed. “How blessed I am that I could have even this much of a view into it and to know these people. What a life for someone who just, you know, was going to be a writer behind the scenes.”

ABC announced late Sunday that Walters will remain executive producer of The View, which she created in 1997.

“I am very happy with my decision,” Walters said, “and look forward to a wonderful and special year ahead.

“I do not want to appear on another program or climb another mountain,” she added. “I want instead to sit on a sunny field and admire the very gifted women—and, OK, some men, too—who will be taking my place.”

Walters has interviewed Fidel Castro, Michael Jackson, Syria’s Bashar al-Assad, and many more. In 1980, she got the first exclusive, live interview with Richard Nixon since his forced resignation.

She recounted to Carleton her interview with the Shah of Iran Mohammed Reza Pahlavi: “What was amazing about this interview was that somewhere along the line, I asked a question about women and could women rule, because at that point, his wife was the regent,” Walters said. “I give the Shah credit, he was certainly not politically correct, and the Shah always said what was on his mind.”

He said no, women could not rule. He asked what women had ever accomplished. When Walters listed off some accomplishments, he conceded that, “Well, maybe a woman can do something.” His wife, with tears in her eyes, asked what men had accomplished with all their wars.

Walters recalled another interviewee who was quite frank: When she asked Henry Ford, founder of Ford Motor Company, a question he did not want to answer, he didn’t mind telling her, “It’s none of your business.”

“I don’t know why more people didn’t tell me that,” Walters said with a laugh.