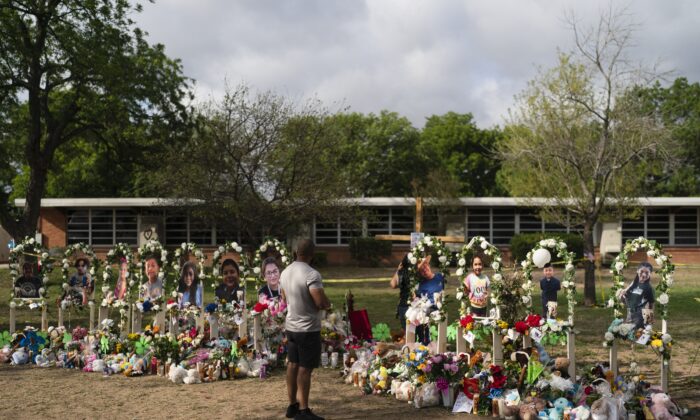 A man pays his respects on May 30, 2022, at a memorial honouring the victims killed in a shooting at Robb Elementary School in Uvalde, Texas, the previous week. (AP Photo/Jae C. Hong)
Viewpoints

The United States is a gun culture, and too often children pay for that obsession with their lives. About 1,000 children in the United States die every year as collateral damage to gang violence. Of the 169 deaths in school massacres since 1999, fewer than 150 were children. But it’s the massacres that unite the nation in a paroxysm of grief and frustration.

That’s because gang violence is seen by most Americans, blessed to live in safe neighbourhoods, through the same lens as we see foreign wars. Deplorable of course, but it’s happening elsewhere. Moreover, Americans feel free to discuss massacre prevention, but fear being labelled racist if they demand more aggressive policing in gang territories.

As a reminder of that risky terrain, former president Obama displayed extraordinary insensitivity following the Uvalde massacre in a same-day tweet that attempted to deflect the nation’s attention away from the massacre and back to the alleged bane of police racism: “As we grieve the children of Uvalde today, we should take time to recognize that two years have passed since the murder of George Floyd under the knee of a police officer. His killing stays with us all to this day, especially those who loved him.” It’s troubling that a former president would choose to co-opt a school tragedy for this purpose. Reliable data confirms that police brutality is not statistically linked to racism.

Which doesn’t mean school massacres don’t have a policing problem. They do: incompetence and cowardice, both in florid evidence on May 24 when 18-year-old Salvador Ramos murdered 19 third- and fourth-grade children and two adults at Robb Elementary School in Uvalde, Texas.

According to their training protocols, obtained by the New York Times, this was when the five armed and able officers should have engaged with the shooter, whatever the risk to themselves. Instead, they waited, even as schoolgirls placed five 911 calls between 12:10 and 12:36 p.m. Meanwhile, anguished parents were attempting to rush the school to rescue their children, with police officers blocking them, all caught on video. Some police officers reportedly entered the school, but only to save their own children. Finally, at 12:50 p.m., an hour and a quarter after the drama began, the police opened the door with a key, charged in, and shot the killer dead. Police initially claimed they believed there were “no kids at risk,” but later acknowledged they made the “wrong decision.”

The police failure in Uvalde is reminiscent enough of the February 2018 massacre in Parkland, Florida, to suggest a pattern. In Parkland, where 14 students and three staff members at Marjorie Douglas Stoneham High School were murdered during 11 minutes of unchecked havoc, sheriff’s deputy Scot Peterson hid behind a pillar outside the building for 45 minutes, even though he was well aware that the killer was roaming freely through the halls and shooting at will. That was bad enough, but seven other deputies who arrived at the school also heard the shots and stayed outside.

The Parkland killer, Nikolas Cruz, a former student at the school, was so mentally disturbed he required constant supervision. He carved swastikas into desks. He threw hard objects at other students. He wrote “KILL” in his notebooks and spoke often about guns. He brought knives to school and, once, a backpack full of bullets. Instead of calling the police, the school forbade him to wear a backpack. Cruz even threatened to shoot up the school.

It gets worse. During Cruz’s middle and high school years, deputies were called to his home 45 times, one of the calls the result of his having punched his mother so hard in the mouth she needed a new set of teeth. That poor woman called Broward County’s mental-health provider in desperation frequently, begging them to have her son institutionalized, but to no avail, even though a school psychiatrist had written to Cruz’s private psychiatrist, “Per recent information shared in school he dreams of killing others and (being) covered in blood.” His mental health provider recommended he engage in “coping skills,” like “reading magazines, watching TV, fishing and spending time with pets.”

You might think such a threat to society would have a criminal record, or at least end up on a police watchlist. But no. Cruz was the “hell” to which good (progressive) intentions paved the road.

Under PROMISE, schools were tasked with assessing students when dealing with anti-social behaviour, including felonies such as drug dealing, sexual assault, and bringing weapons to school. The schools were not to report these behaviours to the police. Under PROMISE, violent students were not even expelled. Instead, they could attend “healing circles” or engage in other touchy-feely activities. Apparently, the PROMISE-building team did not consider the fact that in protecting criminal students from a criminal record, they also facilitated their freedom to buy guns legally, in Cruz’s case an AR-15 rifle. So much for background checks.

In a book about the Parkland massacre, Andrew Pollack, father of murdered student Meadow Pollack, wrote, “His entire life, [Cruz] was practically screaming, ‘if you ignore me, I could become a mass murderer.’” In an earlier interview with Tunku Varadarajan of the Wall Street Journal, Pollack had said, “Parkland was the most avoidable mass shooting in American history. [Cruz] was never going to be a model citizen, but it truly took a village to raise him into a school shooter.”

Pollack sued an already fired and disgraced Scot Peterson for his inaction on the fateful day. Peterson’s lawyer moved to dismiss the lawsuit on the grounds that “Peterson didn’t have the duty” to try to save the kids. The judge didn’t buy it, but where did such a daft idea come from? Perhaps through the same trickle-down effect of unrealistic progressive policies like PROMISE, diminishing the value of policing, presuming violence could be managed by social workers and therapists, that emanated from the Obama White House.

PROMISE was rescinded by Donald Trump.