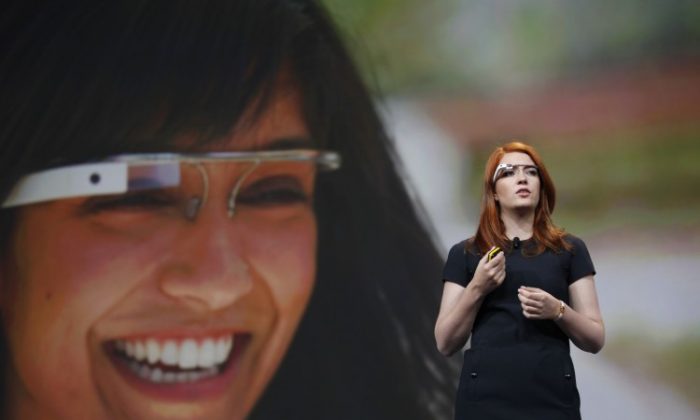 Isabelle Olsson, lead designer of Google's Project Glass, talks about the design of the Google Glass during the keynote at Google's annual developer conference, Google I/O, in San Francisco on June 27, 2012, in San Francisco. (Kimihiro Hoshino/AFP/GettyImages)
US

As a Seattle Bar bans high tech glasses that allow people to take photos or videos with a simple voice command, Facebook users debate whether the glasses could be invasive.

A message posted on Seattle’s The 5 Point Cafe Facebook page that says it will ban Google’s new high tech glasses garnered many critical responses over the weekend.

Google Glass are glasses, not yet available on the market, that will allow users to take a photo by saying “take a picture,” to make a video recording hands free with a voice command, and to search facts by voicing questions, among other functions, according to the product website.

The bar wrote on its Facebook page: “For the record, The 5 Point is the first Seattle business to ban in advance Google Glasses.”

It jokingly encouraged violence to be exacted against violators, which was criticized in some comments on the page. The 5 Point stressed that it was all in jest.

“This was a mostly humorous Facebook post and nothing more,” writes The 5 Point in a later post. “Get a sense of humor. Second, we don’t allow any photographer or videotaping in The 5 Point without our permission and will kick someone out for doing so if we catch them. Third, no we aren’t worried about losing Google Glass-wearing rich people’s business.”

Facebook user Allen Walker commented: “The difference between a phone and the glasses is that you have hold a phone up and point it, with the glasses, you can capture whatever you’re looking at and no-one knows. Hold your phone up with the camera on and wave it around… and notice how people react. It’s subtle but if you pay attention you will see plenty of ‘[what] is that creep doing” reactions going on.”

Another Facebook user said Google Glass video is comparable to being on security surveillance cameras while at the bar.