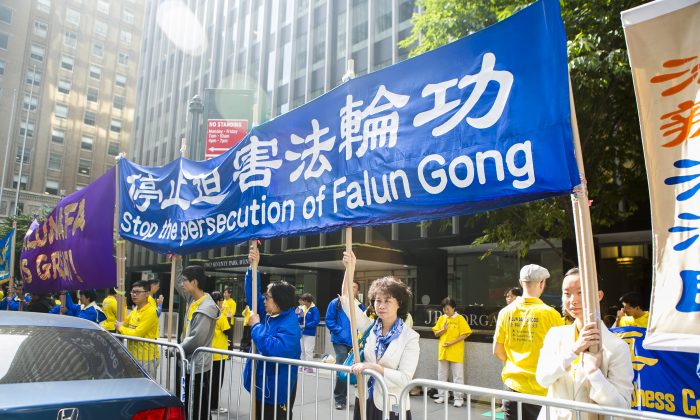 Practitioners of the spiritual discipline Falun Gong call for an end to the persecution of the practice in China, in front of the Waldorf Astoria in New York where Chinese Communist Party leader Xi Jinping is staying, on Sept. 26, 2015. (Samira Bouaou/Epoch Times)
China

NEW YORK—Banners and protesters were never too far from Chinese leader Xi Jinping while he was in Seattle and Washington, D.C., the first two stops of his formal state visit to the United States. Now in New York, where Xi will deliver a keynote speech at the 70th anniversary session of the United Nations on Sept. 28, similar banners are being displayed outside the U.N. headquarters, the Chinese regime’s consulate and permanent mission to the U.N., and near the historic Waldorf Astoria, where Xi is staying.

Among the most prominent and difficult to avoid, are the banners calling for Xi to prosecute his predecessor, the former head of the Communist Party Jiang Zemin. Jiang launched a massive persecution against a popular spiritual practice, Falun Gong, in 1999, and the campaign has hung like a dead weight over Chinese politics ever since.

Over 100 protesters held up these signs on Sept. 26 near the Waldorf Astoria.

Some of the protesters performed the slow moving Falun Gong exercises to music set just loud enough to be heard through the din of traffic. Others handed out pamphlets at street corners for a couple of blocks leading to and from the Waldorf Astoria hotel, the traditional accommodations of choice for overnight stays of dignitaries in New York.

Falun Gong, the traditional Chinese spiritual discipline, became a target for Jiang Zemin when he became frightened by how popular and independent it was. He saw a massive political campaign against the group as a way to amass power in the Party. But the practice was not eradicated, as he hoped, and instead, 16 years later, those who were tortured and put to forced labor are now calling for him to be brought to justice.

Since the end of May, over 180,000 Falun Gong adherents have filed criminal complaints against Jiang for crimes against humanity with China’s highest legal bodies, an act made possible after a change in China’s legal regulations on May 1. Previously, practitioners who tried to lodge complaints against the country’s leader would be thrown in detention, where they faced torture and death.

The evil done by the Communist Party is unrivaled from ancient times to present.
— Yang Jianguo, Falun Gong practitioner

Falun Gong practitioners are calling for Xi Jinping to serve justice to his predecessor because “Jiang Zemin is the one responsible for tens of thousands of practitioners to be abused and tortured, and even killed and have their organs harvested,” said Yi Rong, a Falun Gong spokeswoman in New York and coordinator of the protests during Xi’s stay in the city.

“We want Xi Jinping to stop the persecution, allow practitioners to practice freely throughout China, prosecute Jiang Zemin for the crimes he committed as leader, and get rid of the CCP, and replace it with democracy,” said Alan Adler, the executive director of Friends of Falun Gong, an American nonprofit that advocates for freedom of the practice in China. Adler’s group on Sept. 28 published an open letter in The New York Times appealing to Xi to stop the persecution of the practice.

Xi should “just do it already,” Adler continues, because he “has the power and the support of the Chinese people behind him. … The whole world would be grateful.”

During Washington Jaunt, a Sight the Chinese Entourage Couldn’t Miss

Yi Rong hopes that the Chinese leader “releases all Falun Gong practitioners, and allows a peaceful environment for them to freely meditate and believe in truthfulness, compassion, and forbearance.”

Yang Jianguo and Jiang Li are two Falun Gong practitioners who recently moved to New York due to the persecution, which is ongoing.

Both of them formed part of a contingent at a designated protest area at Hammarskjold Plaza near the U.N. headquarters. Positioned besides the silent, solemn Falun Gong practitioners were citizens from Thailand and Cambodia, who protested their respective governments by shouting slogans and singing songs.

The slightly chaotic atmosphere did not perturb Yang Jianguo, who said he’s happy to be in a country where people have freedom of expression.

“The evil done by the Communist Party is unrivaled from ancient times to present,” Yang announced.

Yang, who arrived from China in August, said his wife was arrested and placed in a labor camp for three years. Yang and other practitioners from the Chinese coastal city of Tianjin submitted a joint criminal complaint against Jiang Zemin while he was still in China in May.

Jiang Li, who once lived in Shanghai and came to the United States in July, also recently filed a complaint against Jiang Zemin (no relation) for the persecution of her mother, father, and five siblings.

Jiang and her brothers and sisters all faced workplace discrimination or were threatened with losing their jobs if they didn’t give up Falun Gong. Jiang was fired from her job after she tried to seek redress for her father, who was killed due to persecution in 2009. A mid-ranking official at the Chongqing procuratorate later accidentally revealed to Jiang and her siblings that her father’s organs had been harvested “for scientific specimens.” And this year, Jiang’s mother was hounded by local security forces to the point that she had to go underground.

Not only protest banners were present during the visit of China’s leader. Pro-Communist Party activists also took to the streets with giant red flags; and at the intersection of Lexington and 48th Street, they assaulted protesters. The protesters, who said their homes in China were confiscated without compensation, were carrying signs calling on Xi Jinping to return their homes and consider human rights. At one point, several members of the pro-Communist group surrounded the protesters, including a 7-year-old girl and her aunt. They also attempted to wrap the protesters in their large red flags, as the latter shouted out for help, until the police intervened.

Correction: An earlier version of this article misstated, due to a translation error, what a mid-ranking Chinese official told Jiang Li about her father’s organs. Epoch Times regrets the error.