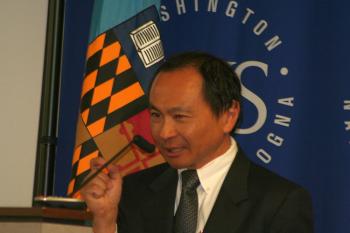 MICROFINANCE: Dr. Francis Fukuyama explains why poor communities may have their own sources of wealth. He spoke April 17 as the keynote speaker at the School of Advanced International Studies (SAIS), John Hopkins University. Dr. Fukuyama is currently Director of the International Development Program at Hopkins. (Gary Feurerberg/The Epoch Times)
Business & Economy

WASHINGTON—In many parts of the world, a poor community could be wealthy in ways other than monetary.

If a nation is peaceful and its people get along well and live according to principles of honesty and unselfishness, it may accumulate what social scientists call “social capital.”

“Social capital is informal,” said Dr. Francis Fukuyama, who is well known for his thoughts on social development. He spoke on April 17, as the keynote speaker of a symposium on Microfinance at the School of Advanced International Studies (SAIS) at John Hopkins University, which cosponsored the event.

“Social capital arises among friends, and is a byproduct of human beings’ natural sociability,” Fukuyama said. He explains that current societies solve problems and conflicts through formal means. We have a contract system, along with “expensive lawyers and court system.”

There are “enormous costs in doing business in a rich society,” but we are willing to pay for them. In a less developed economy, poor people may have no formal mechanisms to work with, or if there is a court system, it will be “prohibitively expensive,” Fukuyama said.

But, “Poor communities can be well-endowed with social capital,” he explained. Speaking to an audience of largely graduate students at John Hopkins who are pursuing higher degrees in this area, he admits that it is very difficult, perhaps impossible, to measure social capital.

Dr. Fukuyama said at the outset that he was not a microfinance man. However, present also at the symposium were representatives from Foundation for International Community Assistance (FINCA), which cosponsored the event with John Hopkins, and other organizations with hands-on experience, like Habitat for Humanity, Arc Finance, The Microfinance Information Exchange Market, Hudson Institute’s Center for Global Prosperity, and Duke University’s Terry Sanford Institute of Public Policy.

In most places in the world it is virtually impossible for a poor person, wanting to start a small business, to obtain a loan. What could poor people put up for collateral? He or she might be able to raise capital paying usurious interest rates, but obtaining a commercial loan with a reasonable interest rate is another matter.

Commercial finance basically leaves out this portion of the world. Banks can make more money from larger, less risky, loans from developed nations. This means that the commercial banks “abandon those who need it the most,” said Fukuyama.

The founder of FINCA may have first conceived of the idea of village banking of making loans to people who have no collateral. In 1985, John Hatch founded FINCA based on his experiences the year before with poor farmers in Bolivia.

“Village banks are highly democratic, self-managed, grassroots organizations. They elect their own leaders, select their own members, create their own bylaws, do their own bookkeeping, manage all funds, disburse and deposit all funds, resolve loan delinquency problems, and levy their own fines on members who come late, miss meetings, or fall behind in their payments,” Hatch said in 2004.

FINCA provides financial services to the world's lowest-income entrepreneurs—those who have the least access to services such as loans, savings programs, and insurance.

Since 1984 FINCA services have benefited over 750,000 clients via 20,000 village banks in 24 countries on four continents, according to its Web site.

Others too saw the advantages of this approach to providing credit to poor people in what has come to be known as “microfinance.” Microfinance has enabled thousands living in poverty to obtain loans without collateral.

What has replaced the collateral in a formal loan system is social pressure. The community can put enormous pressure on the borrower to repay the loan—this is why social capital is another kind of wealth. In addition, members collectively guarantee repayment. Other group members, according to FINCA sources, must cover a shortfall by any one member.

Today, microcredit enjoys considerable acceptance. This acceptance was evident when the 2006 Nobel Peace Prize was awarded to Muhammad Yunus and Grameen Bank for their contributions to microfinance.

Fukuyama gave an amusing example of Orthodox Jews who run diamond businesses in New York City. A member of the group may leave diamonds with another member and walk away without a receipt, but leave empty-handed. The community of Orthodox Jews of the diamond business is so tight, they know that no member would run off with the diamonds, and if one did, they all know where to find him.

This example has mostly academic value because probably the diamond dealers are not poor and have ready access to credit. However, on the FINCA Web site states that “few banks or other commercial entities are willing to invest in rural markets or countries in turmoil.”

Of course, these are precisely the areas that most need economic assistance. FINCA has successful programs in the world’s poorest countries, such as Malawi and Haiti, and in those where social and political strife are or were intense—Kosovo, Democratic Republic of the Congo, and Afghanistan.