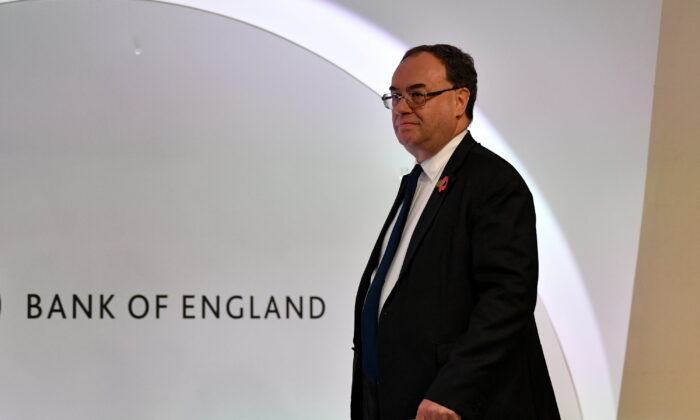 Governor of the Bank of England Andrew Bailey arrives to address the Monetary Policy Report Press Conference at The Bank of England, in London, on Nov. 4, 2021. (Justin Tallis/Pool via Reuters)
Inflation

LONDON—The Bank of England looks set to press on with raising interest rates on Thursday as it tries to stop soaring inflation from becoming engrained in the British economy.

All but five of 49 economists recently polled by Reuters thought the BoE will raise Bank Rate for a third meeting running, back to its pre-pandemic level of 0.75 percent, with the rest expecting it to stay on hold at 0.5 percent.

The BoE last month predicted inflation will peak at around 7.25 percent in April—almost four times the British central bank’s 2 percent target—but that forecast has been overtaken by seismic shifts in European energy markets following Russia’s invasion of Ukraine.

Investors will be watching for any new thinking from rate-setters on how they—like central bankers elsewhere—plan to deal with the competing forces of price pressures and slowing economic growth which could even turn into a recession.

The U.S. Federal Reserve raised interest rates by a quarter of a percentage point on Wednesday and laid out an aggressive plan to push borrowing costs to restrictive levels by next year, as concerns about high inflation and the war in Ukraine overtook the risks of the coronavirus pandemic.

The European Central Bank, which is behind the BoE and the Fed in reversing its pandemic stimulus, agreed last week to stop pumping money into markets this summer, clearing the way for possible rate increases in 2022.

“The war in Ukraine means that UK inflation is going to stay higher for longer,” said ING economists James Smith and Chris Turner. “Markets have concluded that this means the BoE will double-down on its tightening plans.”

The Reuters poll of economists, published on Tuesday, suggested inflation in the second quarter will average almost 8 percent, which would be the highest rate since the early 1990s.

All nine Monetary Policy Committee members were expected by most economists to vote for a rate hike, but there could again be a split vote over the extent of tightening needed.

Last month a slim majority of five, including Governor Andrew Bailey, voted to raise rates by 25 basis points, rather than a bigger 50 basis point hike. Faster action risked ramping up market expectations for future rates hikes that were already sufficient to push inflation well below target in future years, they said.

Those bets in the market have steepened over the last month and now point to a Bank Rate of 2 percent by the end of next year.

Paul Hollingsworth, the chief European economist at BNP Paribas, said he thought growth concerns would come to the fore later this year, “suggesting that market pricing of six hikes by the year-end looks way off the mark.”

The four MPC members who voted to raise rates by 50 basis points last month worried that high inflation risked becoming engrained in expectations for prices and wages among businesses and consumers.

Data over the past month brought mixed news on that front.

The public’s inflation expectations have strengthened to new multi-year highs, according to surveys as the labor market remained hot.

But a BoE report last week pointed to weak forecasts of pay growth among households, which sat awkwardly with Governor Bailey’s appeal last month for people to show restraint when asking for a pay rise.

With investors also eyeing a budget update next Wednesday from finance minister Rishi Sunak, the British Chambers of Commerce said economic policymakers should beware of an increased risk of recession.

“Raising interest rates and taxes at this time would weaken the UK’s growth prospects further, by undermining confidence and diminishing households’ and firms’ finances,” said Suren Thiru, head of economics at the BCC.