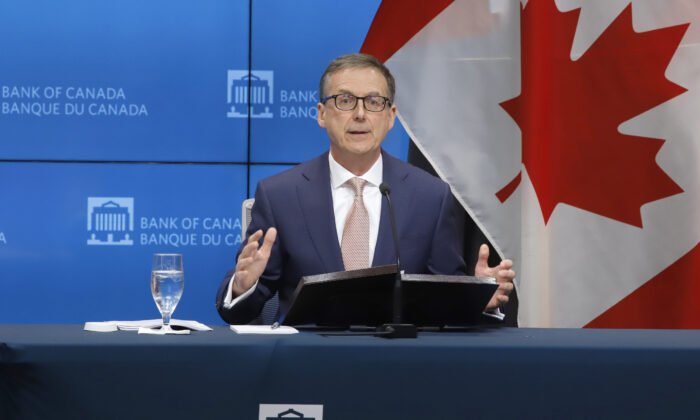 Governor of the Bank of Canada Tiff Macklem speaks at a press conference in Ottawa on June 9, 2022. The central bank raised its overnight rate target by 3/4 of a percentage point on Sept. 7. (The Canadian Press/Patrick Doyle)
Economy

Bank of Canada Ups Key Rate to 3.25 Percent and Into Restrictive Territory

OTTAWA—As widely expected, the Bank of Canada raised its key rate by 75 basis points (0.75 percent) to 3.25 percent on Sept. 7 to keep dampening demand to reduce inflation.

This is the highest the central bank’s policy rate has been since April 2008 when it was 3.5 percent, just prior to the onset of the financial crisis.

The Bank of Canada previously said that the neutral range for its overnight rate target was between 2 percent and 3 percent, meaning that at 3.25 percent, the interest rate is now in restrictive territory and will act to cool down the economy.

The BoC also made it clear that more rate hikes are coming.

“The Governing Council still judges that the policy interest rate will need to rise further,” said the central bank in its official statement.

“We will be assessing how much higher interest rates need to go to return inflation to target.”

Bank of Canada governor Tiff Macklem said he believes inflation may have peaked in an Aug. 16 National Post editorial. July inflation came in at 7.6 percent—down from June’s reading of 8.1 percent. But the BoC’s three core measures of inflation have not peaked and their average rose to above 5 percent in July.

The BoC attributed the small drop in inflation to gasoline prices but countered that with the fact that “data indicate a further broadening of price pressures, particularly in services.”

The central bank said short-term inflation expectations are still high and that “the longer this continues, the greater the risk that elevated inflation becomes entrenched.”

The BoC has now raised its policy rate by a full 3 percentage points since March and signs that the economy is slowing are becoming more widespread. But certain segments of the economy remain robust.

The Canadian economy grew at an annual rate of 3.3 percent in the second quarter, which was weaker than the BoC’s projections and over 1 percent less than market expectations. The preliminary estimate of July’s gross domestic product is for a drop of 0.1 percent.

The labour market lost jobs in June and July and the BoC also noted that U.S. economic activity had moderated. The U.S. Federal Reserve has raised rates by 2.25 percent since March.

However, BMO chief economist Doug Porter noted on Aug. 31 that consumer spending was very strong in the second quarter—soaring at a 9.7 percent clip—and that households still have “considerable spending firepower” based on their build-up of savings over the past 10 quarters.

The downside to this is that consumer confidence plunged in July and TD Securities said on Sept. 2 in its preview of the Bank of Canada rate decision, that this could cause a portion of the build-up of household savings to “become permanent.”

Some drivers of inflation are losing steam, but other factors support it.

The U.S. benchmark West Texas Intermediate oil price has been below US$100 per barrel for over a month now. Global supply chain bottlenecks have been easing, and consumer demand for goods—notably for housing—is waning.

According to the Canadian Real Estate Association, national home sales were down 5.3 percent in July and the number of transactions fell 29.3 percent.

On the other hand, the Canadian dollar traded below US$0.76 prior to the BoC announcement. A low currency causes prices of imports to rise, which boosts inflation.

And the central bank noted that while some commodity prices have fallen, natural gas prices have risen.

The BoC also announced that it is continuing its policy of quantitative tightening—allowing its balance sheet to come down as the government bonds it purchased during the pandemic mature without the proceeds being reinvested.