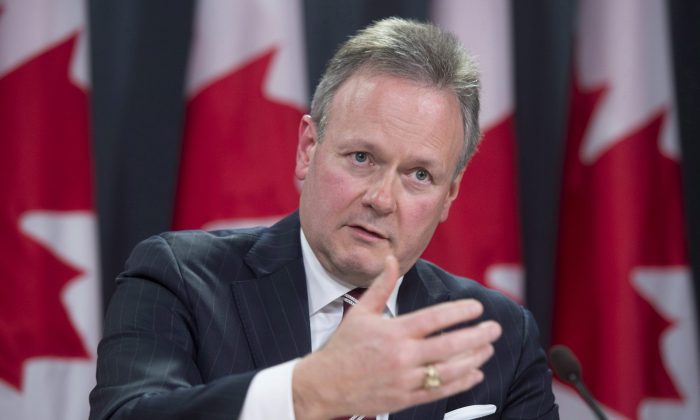 The Bank of Canada kept rates unchanged on Sept. 9 as the economy evolves according to July’s projections. Its governor, Stephen Poloz, speaks at a news conference in Ottawa on July 15 after the release of the monetary policy report. (The Canadian Press/Adrian Wyld)
Business & Economy

OTTAWA—It’s a bit of déjà vu all over again for the Bank of Canada.

Back in late May, the central bank felt the economy was evolving in line with its then most recent April projections. Therefore, no changes were made to interest rates.

Developments then went from bad to worse in the energy sector and, in July, the BoC cut rates for the second time this year and revised its growth projections lower.

The belief that the impact on the economy of the plunge in oil prices was going to be more front-loaded, but not larger, had been shattered.

The stimulative effects of previous monetary policy actions are working their way through the Canadian economy.
— Bank of Canada

On Wednesday, Sept. 9, the Bank of Canada kept the overnight rate target at 0.50 percent feeling inflation and economic growth were in-line with July’s projections. Not only that, but the Canadian economy has finally been showing signs of improvement due to factors the Bank had been counting on, namely exports, an improving U.S. economy, and “solid household spending.”

“The stimulative effects of previous monetary policy actions are working their way through the Canadian economy,” stated the Bank on Sept. 9.

While the price of oil has come down from July’s projections (West Texas Intermediate price of US$60 a barrel) and concerns about China and emerging-market economies have increased, the effects of a lower Canadian dollar and a strengthening U.S. economy have kept the Canadian economy in what governor Stephen Poloz once referred to as the “neutral zone” for monetary policy where no changes are needed.

Last week’s GDP report confirmed the economy shrank 0.5 percent in the second quarter, exactly as the BoC projected in July.

The good news, to accompany the confirmation of a technical recession, was June’s GDP growing by a better-than-expected 0.5 percent.

“This strength sets up Q3 GDP to return to positive growth and even suggests some upside risk to the central bank’s forecasted increase of a 1.5 percent annualized gain,” said RBC in a Sept. 7 bulletin.

“We’re pretty comfortable with our above-consensus forecast for 2.8 percent Q3 growth—the BoC projected 1.5 percent in the MPR,” said BMO in its weekly Focus publication on Sept. 4.

Though uncertainty still remains for the overall exports picture, “The latest data confirm that exchange rate-sensitive exports are regaining momentum,” stated the Bank of Canada on Sept. 9.

The Bank thus held steady in September as was widely expected.

But it also acknowledges the Canadian economy is not out of the woods yet as the adjustment to lower oil prices and commodities is “expected to take considerable time.”

“In other words, it [Bank of Canada] is implicitly saying that monetary policy will stay highly accommodative for a long time,” according to a National Bank note.

The biggest risk to the Bank’s projections from July was a larger decline in the oil and gas sector. That risk played out between April and July.

“If prices remain at current low levels for an extended period, or fall further, firms may adjust their spending plans downward yet again,” said the Bank in the July monetary policy report.

It also remains to be seen how global growth worries stemming from China and emerging markets affect sentiment and commodity prices going forward.

“Our baseline view assumes that the combination of strong U.S. growth and a weak Canadian dollar will result in non-commodity [service, manufacturing sector] exports accelerating while consumers are forecast to continue to take advantage of low interest rates backed by a solid labour market and rising net worth,” said RBC’s in a note.

RBC believes the time has come for strength in the rest of the Canadian economy to more than compensate for weakness in the energy sector.

“Growth in these areas of the economy are forecast to more than offset any further weakness in investment by energy companies due to the low level of oil prices,” according to RBC.

The Bank’s next rate announcement is Oct. 21 and will be accompanied by new projections.