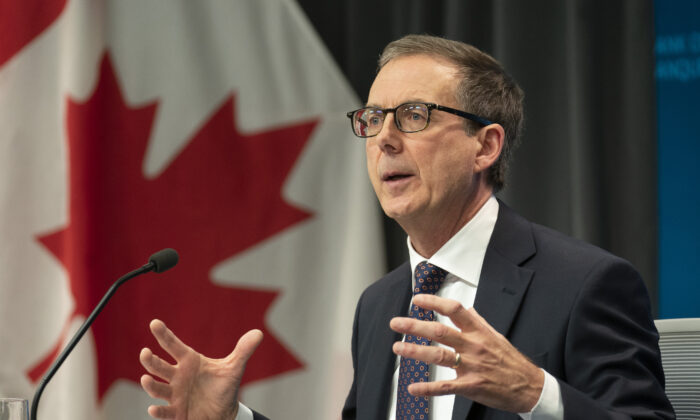 OTTAWA—The Bank of Canada (BoC) hiked its key interest rate by 50 basis points—half a percentage point—to 1 percent and announced an end to its government bond-buying program on April 13.

Both actions were widely anticipated as the Canadian economy runs red hot. The BoC has not raised rates by 50 basis points in a single announcement since 2000.

“With the economy moving into excess demand and inflation persisting well above target, the Governing Council judges that interest rates will need to rise further,” the Bank of Canada said in its interest rate decision statement.

Signs that the Canadian economy is overheating are the 5.7 percent annual inflation rate, which has been above the 3 percent upper limit of the BoC’s inflation target range since April 2021, and the 5.3 percent unemployment rate—the lowest on record since comparable Statistics Canada data became available in 1976.

The central bank revised its inflation outlook higher from its last set of quarterly forecasts in January, saying in its quarterly monetary policy report (MPR) that the upward revisions to inflation “are primarily related to the consequences of the invasion of Ukraine, which has driven up commodity prices and exacerbated supply disruptions.”

“CPI [consumer price index] inflation is now expected to average almost 6 percent in the first half of 2022,” the BoC said.

The bank said in an analysis of the impacts of Russia’s invasion of Ukraine on the Canadian economy that, factoring in supply chain disruptions, rising commodity-linked prices and production costs, 0.7 percentage points are being added to CPI inflation in 2022.

The BoC noted that goods inflation hit 7.6 percent in February—double that of services inflation. The bank said that goods prices are driven primarily by global determinants such as oil prices, whereas services prices are more domestically driven.

“Overall, the pickup in inflation has been concentrated in traded goods prices,” the BoC said in the MPR.

The central bank also warned of a growing risk that expectations for higher inflation could become entrenched. This increasing risk is due to firms raising prices in response to higher demand and supply constraints, the bank said.

Businesses are reporting acute labour shortages. The bank’s business outlook survey reiterated that the productive capacity and surging input costs are bigger concerns for businesses than any weakness in demand.

The bank said labour markets are “tight” and “wage growth is back to pre-pandemic pace and rising.” Statistics Canada reported that average hourly wages increased 3.4 percent on a year-over-year basis.

The bank had been reinvesting the proceeds of its maturing government bonds since Nov. 2021, which was resulting in purchases of about $4 billion to $5 billion every month, but in announcing “quantitative tightening” (QT), the BoC will stop buying Government of Canada bonds altogether.

Thus, the bank will stop efforts to put downward pressure on longer-term interest rates and increasing the money supply—liquidity in the financial system. The BoC said QT will shrink the BoC’s balance sheet over time and within the next two years, about 40 percent of the bank’s government bond holdings will mature.

Economic growth is expected to be 4.25 percent this year before cooling to a still robust 3.25 percent in 2023. The BoC said growth “looks to have been stronger in the first quarter than projected in January.”