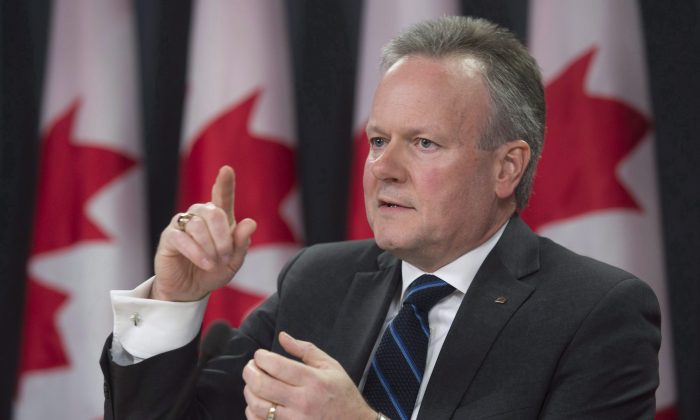 OTTAWA—The Bank of Canada kept its key rate unchanged at 0.50 percent on March 9, as unanimously expected, saying that the recent improvement in the global economy and financial markets is “progressing largely as the Bank expected in its January Monetary Policy Report (MPR).”

It was a close call in January whether or not to cut rates, but looking through the highs since then and the lows leading up to that announcement date, it’s steady as she goes.

The big variable remains details on the federal budget’s deficit spending. The BoC said it will assess the impact of the March 22 announcement for its next set of projections in the April MPR. “That’s when things get interesting,” said BMO in a note.

It is time for fiscal policy to take the baton to spur economic growth and the sentiment that major central bank monetary policy has maxed out is growing. The latest unconventional measure of negative rates is blamed for a number of woes including trimming banks’ profits and distorting saving and spending behavior. Fortunately in Canada’s case, the federal government’s balance sheet is in good shape and can take on meaningful deficits. But the federal government is committed to maintaining a low debt-to-GDP ratio so any anticipated deficit spending isn’t expected to threaten the credit worthiness of the country.

BMO cautions, “Fiscal stimulus from Ottawa is no miracle growth cure for the economy.” A relapse in oil prices falling will expose the weak economic growth outlook.

Giving Context to the Rebound

Since the bank’s last interest rate announcement on Jan. 20, at the height of the volatility in financial markets when it could have cut rates, oil prices and the loonie have skyrocketed. West Texas Intermediate prices are up about 40 percent and the Canadian dollar is up about 9 percent making it one of the strongest performing currencies in 2016. Bloomberg’s Commodity Index is also up about 8 percent since Jan. 20.

The central bank acknowledged the rebound in the Canadian dollar and oil prices that make them now more in-line with the levels assumed for the projections in January.

Leading up to the Jan. 20 meeting, the loonie’s sharp depreciation was a concern for the central bank since it could lead to unhinged inflation expectations. Along with anticipating details of the federal government’s deficit spending, the loonie’s weakness held the BoC back from cutting rates and exacerbating the loonie’s problem.

The BoC downplayed the better-than-expected fourth-quarter GDP growth. It came in 0.8 percent; better than the 0.0 percent projected in January. Similarly, January’s robust consumer price index (CPI) year-over-year increase of 2.0 percent is thought of as temporary. RBC said on Feb. 19, “the headline rate is likely going to retrace the increase in February and March,” as the gasoline price spike that occurred in February 2015 is unlikely to be repeated.

“Material excess capacity in the Canadian economy will continue to dampen inflation,” said the BoC, putting the data in context. From January’s statement, the bank expects inflation to truly rise to about 2 percent in early 2017 as temporary factors dissipate.

A welcomed sign for the central bank is “Non-energy exports are gathering momentum.” In 2015, nine of 11 sectors posted increases and January’s report confirmed the strengthening trend. But the bank reiterated that “business investment remains very weak.” It has overwhelmed almost any strength in other parts of the Canadian economy for over a year now.

The bank’s next interest rate announcement is April 13. It will be accompanied by a new set of GDP growth and inflation projections after digesting the government’s March 22 budget.