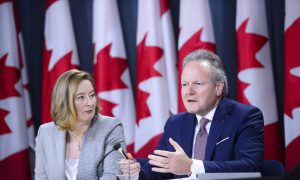 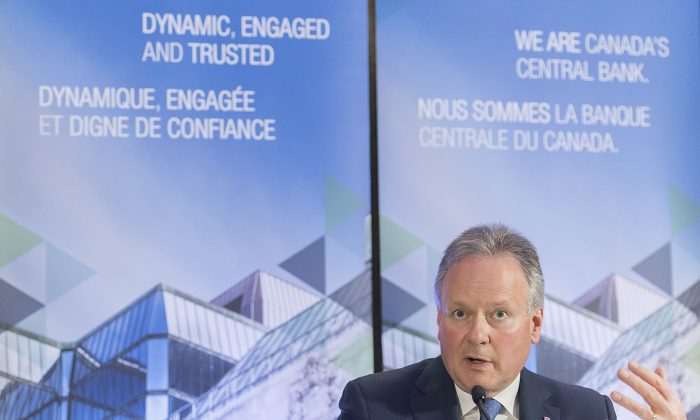 Governor of the Bank of Canada Stephen Poloz speaks during a press conference in Montreal on Feb. 21, 2019. In its second interest rate decision of 2019, the BoC kept its key rate unchanged at 1.75 percent. (The Canadian Press/Graham Hughes)
Economies

Bank of Canada Increasingly Uncertain About Next Rate Hike

OTTAWA—As widely anticipated, the Bank of Canada left its key interest rate unchanged at 1.75 percent on March 6 citing a weaker-than-expected outlook both domestically and globally.

The bank dropped its seemingly entrenched mantra that the policy interest rate will need to rise into a neutral range from its current accommodative level. Now, the interest rate outlook is even more opaque than in January when the BoC made an effort to inject some ambiguity into the timing of future rate hikes.

However, the BoC gave no hint at a potential rate cut even as talk of an economic recession mounted after dismal fourth quarter of 2018 economic growth of 0.4 percent.

“It will take time to gauge the persistence of below-potential growth,” said the BoC in its March 6 press release.

University of Waterloo economic professor Jean-Paul Lam says the bank is no longer talking about getting back to the neutral range for its key rate, which is estimated to be between 2.5 and 3.5 percent.

“They’ve given up on being very forward-looking right now,” Lam said in an interview.

He adds that it’s the first time in a long while he has seen the BoC in a mostly reactionary mode given what economic data comes in.

“That is a position they haven’t been in for a long time in terms of how to set policy.”

Economists agree there is little justification for a rate hike for most of 2019. The Bank of Canada has already raised rates by 1.25 percent since mid-2017.

“The slowdown in the fourth quarter was sharper and more broadly based,” said the bank.

The weak economic growth comes in contrast to strong job and income growth. Despite these fleeting positive developments, consumer spending—which makes up more than half of GDP—and the housing market have struggled. Retail sales volumes were up only 0.7 percent in 2018 versus nearly 6 percent in 2017.

The BoC didn’t provide much commentary on the housing market, other than to say it was soft. Home sales slumped in 2018 due to rising rates and more stringent mortgage eligibility. BMO economist Benjamin Reitzes calls the housing market a “big concern.”

The outlook for consumer spending is gloomy. Equifax reported mortgage delinquency rates are on the rise.

But more importantly, Lam said, is the amount of people seeking to renegotiate their loan terms. These people are trying to find ways to reduce their cost of borrowing in order to increase or maintain their level of consumption.

“Consumption is really a major concern,” Lam said. “The housing sector may be more vulnerable than what they think it is right now.”

Another fleeting positive for a net oil exporting country like Canada is stronger oil prices globally since January and a tight differential between the Canadian benchmark price and the U.S. West Texas Intermediate price.

Nevertheless, the bank said it appears the economy will be weaker in the first half of 2019 than anticipated in January when it published its most recent set of quarterly projections.

The bank’s measures of core inflation remain stable and very close to the 2 percent target even as official inflation fell to 1.4 percent in January because of lower gas prices.

The Canadian dollar and long-term interest rates also reflect a weakening of the economic outlook since the last BoC rate decision, however, Canadian stocks have surged in 2019.

“It is clear that global economic prospects would be buoyed by the resolution of trade conflicts,” said the bank. Market sentiment, as gauged by stock markets, may be more enthusiastic than economic performance due to the anticipation of a resolution of the U.S.–China trade dispute.

“It looks like there is absolutely no reason right now to raise rates unless we get some sort of major resolution on the trade front between the United States and China,” Lam said.