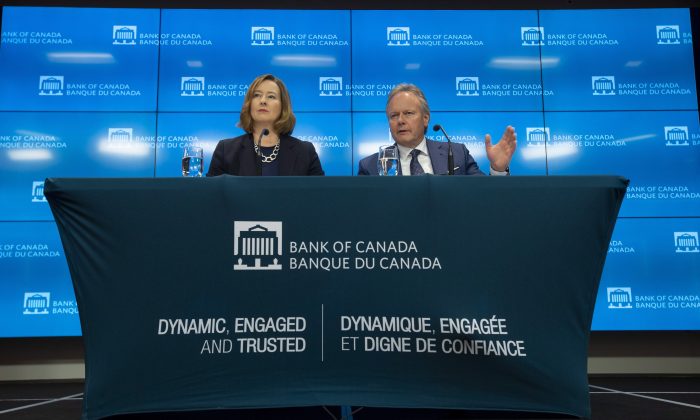 OTTAWA—The Bank of Canada recognized a better-than-expected second quarter on July 10; however, deeper analysis of the trade tensions between the United States and China yields a weaker global outlook and slightly lower growth profile for Canada.

A significant amount of the bank’s latest analysis is of the trade war brought on by the United States’ efforts to get China to reform its untoward practices and operate as a good global citizen, as the current levels of tariffs have had more time to take effect.

The Bank of Canada says there is considerable uncertainty in estimating the impacts of trade policy. On one hand, global value chains are being disrupted, which negatively affects business investment and incomes, and on the other hand, confidence and labour productivity effects could be more pronounced.

“The sentiment part has been an important driver of the global slowdown,” said Bank of Canada governor Stephen Poloz.

“Central banks in advanced economies have not faced this type of trade-off since the 1970s,” said Bank of Canada senior deputy governor Carolyn A. Wilkins.

In the bank’s extreme upside scenario, the global economy returns to pre-2017 trade arrangements. Under this scenario, Canadian GDP is about 2 percent higher and the disinflationary effects of removing the tariffs are small.  The scenario does not consider the potential benefits to Canada of a new U.S.–China trade deal in which China operates by international norms.

Wilkins says that such a scenario is what the bank could model reasonably, as it existed before, but that the world probably would not go back there now, as the United States, China, and other countries are working toward reaching a different paradigm.

“We just don’t know what that would look like,” Wilkins said. “It would be a completely different scenario that we’d need to model, but if we were in a different place, it would be a positive.

“Is the extreme upside scenario we have there the absolute best we could hope for? My answer would be, I hope not.”

The downside scenario has the United States raising tariffs on all imports to 25 percent with retaliation from trading partners. This would hit Canadian GDP by about 6 percent and put temporary upward pressure on inflation.

Tony Stillo, director of economics for Canada at Oxford Economics, agrees that economists have a better handle on modelling the downside of an escalation in trade tensions but are lacking in their ability to model the upside that the United States hopes to achieve.

“I don’t think we’ve done that either,” Stillo said.

According to BoC growth estimates, the impact on China is slightly greater than on the United States. “China’s export growth has slowed significantly. Import growth has become negative,” according to the July MPR.

China is more dependent on trade than the United States is, but it has also done more to stimulate its economy as it suffers the impact of the tariffs.

In its risks to the inflation outlook, the Bank of Canada says trade policies and the associated uncertainty are the biggest risks, but China was singled out as a downside risk relating to trade. “Additional policy stimulus … could exacerbate financial vulnerabilities if it led to an increase in leverage,” according to the MPR.

The BoC upgraded its second-quarter growth forecast to 2.3 percent, from 1.3 percent in April’s MPR, but remained neutral on the next interest rate move. As widely expected, Canada’s central bank left its key policy rate at 1.75 percent.

“The degree of accommodation being provided by the current policy interest rate remains appropriate,” said the BoC.

The Canadian economy is benefiting from a surge in oil production, a healthy labour market, and stabilization in housing markets supported by falling longer-term mortgage rates.

Even as economic growth was stuck in low gear late last year and early this year, the labour market has been a true bright spot for the economy and wage growth is now improving notably. The bank’s composite measure of wages rose to almost 2.5 percent—up from 2 percent in the first quarter. The June jobs report showed wages increased 3.8 percent year-over-year.

Inflation, as usual, gets buffeted by temporary factors like gasoline prices, but it has not been materially impacted by trade tensions and remains close to the 2 percent target.

Much attention is being focused on what the BoC does given that markets are pricing in a rate cut by the U.S. Federal Reserve at the end of July. The Canadian dollar has risen more than 3 percent since the April MPR as rate cut expectations between the two countries diverge.

“The United States is slowing to a more sustainable pace, while Canada is moving back up to its trend growth,” Wilkins said.

Stillo believes the Bank of Canada would cut rates if the loonie was getting to US$0.80. It got a boost from the BoC and climbed to US$0.765 on July 10—close to its highest level since late October.

Mostly as a result of global trade tensions, central banks in Europe and the United States have signalled their willingness to provide more accommodation to their respective economies. For the Canadian economy, these actions stand in contrast to the current domestic situation of a neutral stance.

“Despite the downgrade to the outlook, it’s going to take a deeper deterioration to spark conversations about easing even as the Fed seems poised to lower rates at month end,” wrote BMO strategist Benjamin Reitzes in a note.