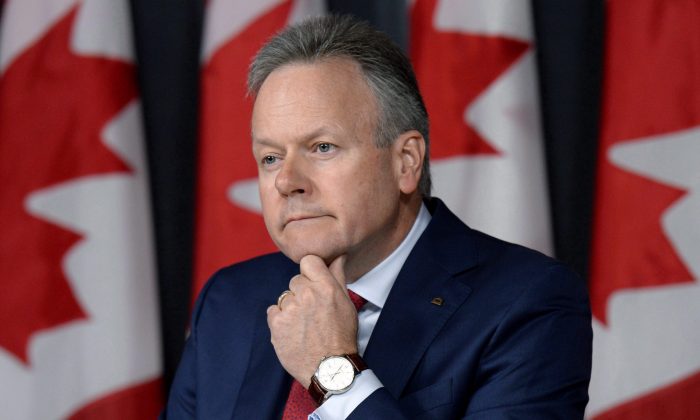 Key rate held at 0.50% with 'substantial rebound' projected for second half of 2016
By Rahul Vaidyanath

OTTAWA—The Bank of Canada is worried about the hole the Canadian economy fell into during the second quarter of 2016, but expects a strong rebound in the second half of the year.

In its Sept. 7 interest rate decision, Canada’s central bank highlighted the Q2 underperformance in exports after factoring in lower U.S. business investment spending. The BoC appears to be more doubtful than ever about its exports recovery narrative and suggested that the economy’s growth profile will be lower than it projected in July.

As expected, the BoC held its key rate at 0.50 percent admitting, “The risks to the profile for inflation have tilted somewhat to the downside since July.” Bloomberg’s survey of 21 economists showed unanimous belief that there would be no change in rates on Sept. 7. But if anything now, the Bank’s dovish tone will give financial markets reason to believe a rate cut is slightly more likely.

In holding rates steady, the Bank is projecting a “substantial rebound” in the second half of 2016 spurred by the recovery in oil production after the devastating Alberta wildfires and the boost to consumer spending from the Canada Child Benefit payments. But this is a temporary boost; the growth trend is likely to be lower as exports underwhelm.

Canada’s second-quarter economic growth came in worse than the BoC projected in July. The 1.6 percent drop was higher than the 1.0 percent expected partially because of “a drop in exports that was larger and more broad-based than expected,” said the BoC.

Exports suffered an outsized drop of 18.5 percent in Q2, but preliminary readings for July are cause for some optimism.

Risks to the profile for inflation have tilted somewhat to the downside since July.
— Bank of Canada

“The rebound in export volumes in July did not fully retrace earlier weakness, with non-energy exports still below year-ago levels in the month,” said RBC senior economist Nathan Janzen in a Sept. 2 note.

Non-energy exports—what are supposed to be the Canadian economy’s ticket to stronger and more sustained growth—have been down in four of the last six months. But in July, they rose at a similar pace to overall exports, which went up 3.4 percent.

The Bank is encouraged by July’s exports, but said, “The ground lost over previous months raises the possibility that the profile for economic activity will be somewhat lower than anticipated in July.”

Overall, the Canadian economy grew by 0.6 percent in July, which looks to be a good start to the second half of the year.

“We remain of the view that absent material disappointment in exports, further easing is unlikely,” said TD Economist Brian DePratto in a note. TD’s forecast calls for the BoC to hold rates steady for 2017 and 2018.

The loonie fell about half a cent after the Bank’s dovish statement was released. A weaker currency may be the Bank’s intention, according to CIBC chief economist Avery Shenfeld.

“Maintaining a competitive advantage through a softer exchange rate features heavily in their thesis, as well as in our own forecast, for improving non-energy export prospects in 2017-18,” said Shenfeld in a note.

The Bank’s next interest rate announcement takes place Oct. 19. It will be accompanied by an updated Monetary Policy Report that will include projections for economic growth and inflation.