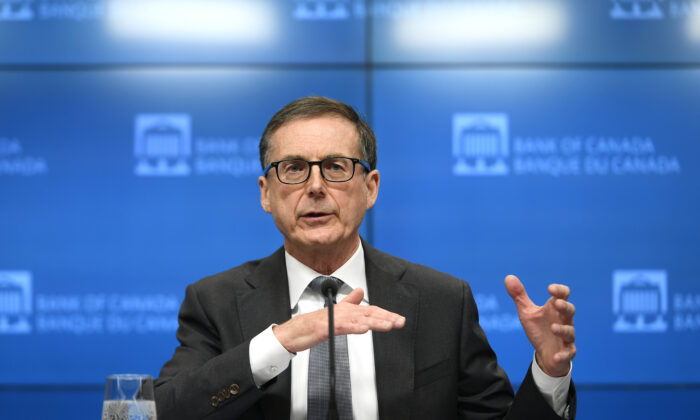 Bank of Canada Governor Tiff Macklem speaks at a press conference in Ottawa on Dec. 15, 2021. (The Canadian Press/Justin Tang)
Economy

The Bank of Canada held its key policy rate at 0.25 percent on Jan. 26, but is ready to start raising rates.

The central bank judges that “economic slack [is] now essentially absorbed” and said its governing council decided to “end its extraordinary commitment to hold its policy rate at the effective lower bound.”

“The Governing Council expects interest rates will need to increase, with the timing and pace of those increases guided by the bank’s commitment to achieving the 2 percent inflation target,” according to the Bank of Canada’s interest rate announcement.

The BoC also delivered a new set of forecasts in its quarterly monetary policy report (MPR) released Jan. 26, projecting slightly slower economic growth for both 2022 and 2023 compared to its previous projections in October 2021, along with a bit more persistent inflation. It indicated that robust growth for the Canadian economy should resume in the second quarter of 2022.

Despite noting that inflation is forecast to remain close to 5 percent over the first half of 2022 due to supply constraints, high energy prices, and rising food costs, the MPR says that longer-term 5- and 10-year measures of inflation expectations are still “well aligned with the 2 percent inflation target.”

The central bank anticipates inflation easing to about 3 percent by the end of 2022 as supply chains normalize and pressures from elevated energy prices and food costs dissipate.

The BoC MPR analyzed food price inflation, which is up nearly 6 percent year-over-year and is at a 10-year high. It pointed out the increase in the price of meat as examples—beef up 12 percent, bacon up 19 percent, and chicken up 6 percent.

“These increases in food prices will likely continue. As a result, the Bank of Canada expects that food price inflation will be above its historical average over 2022.”

The BoC says that domestic prices for agricultural commodities follow global prices, and these have recently increased significantly due to unfavourable weather conditions like drought in many parts of the world, as well as supply chain disruptions and higher energy costs for distribution.

“Under the assumption that oil prices remain flat, the boost from higher gasoline prices should also fade in the coming quarters,” according to the MPR, which assumes the price of West Texas Intermediate remains around US$75 a barrel over the projection period from 2020 to 2023.

December’s annual inflation hit 4.8 percent, marking the ninth-straight month that inflation has been above the central bank’s 3 percent upper limit within its target range for year-over-year changes in the consumer price index.

The MPR stated that the labour market had recovered to pre-pandemic levels by the end of 2021 and that wage growth is rising amid high job vacancies. The unemployment rate in December, 5.9 percent, was just 0.2 percentage points higher than it was in February 2020, the central bank noted.

The BoC sees the economic impacts of Omicron to be limited to the first quarter of 2022 and says that “the expected short duration of restrictions should limit the impact on the labour market.” Currently, Omicron is weighing—albeit temporarily—on employment in hard-to-distance sectors, said the central bank.