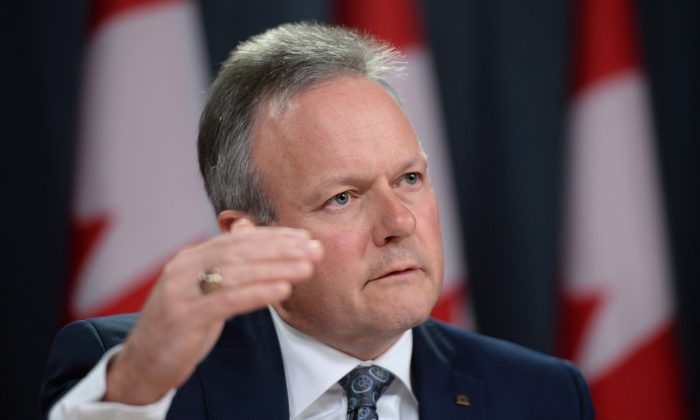 OTTAWA—As widely expected, the Bank of Canada kept its overnight rate target at 0.50 percent on Weds. Dec. 2, saying the economy is behaving as expected. A Bloomberg survey of 33 economists showed unanimity in expecting the BoC to leave rates unchanged.

The central bank has been emphasizing the economy is diversified and it expects the non-resource sectors to eventually outweigh the drag from the energy sector. Two rate cuts this year have been propping up the economy, however energy prices have edged lower recently.

The resource sector is still contending with lower prices for commodities.
— Bank of Canada

The question remains: How robustly is the Canadian economy pushing ahead despite ongoing oilpatch weakness? The price of West Texas Intermediate oil has mostly been below the bank’s October monetary policy report (MPR) assumption of US$45 a barrel. But the loonie has followed suit and is hovering slightly below US$0.75, offsetting some of the drag.

What has really hurt the Canadian economy has been cuts in resource-sector spending and the bank reiterates that business investment “continues to be weighed down” by it.

“The resource sector is still contending with lower prices for commodities,” said the BoC in its statement.

The opposing force is the export sector picking up, aided by a weak currency, as the latest gross domestic product (GDP) report from Statistics Canada highlighted on Dec. 1.

Third-quarter GDP growth of 2.3 percent indicates a greater offset to the weak oil prices coming from rising exports. The Bank of Canada’s forecast was for 2.5 percent Q3 GDP growth before slowing in the fourth quarter to 1.5 percent.

The GDP report showed export growth rose 9.4 percent in Q3 after a 1.9 percent increase in Q2, and a 1.0 percent decline in Q1.

“The U.S. economy continues to grow at a solid pace,” according to the central bank’s Dec. 2 statement. The Fed is expected to finally raise rates in a couple of weeks.

In the context of differing growth prospects globally, the BoC stated, “Policy divergence is expected to remain a prominent theme.”

According to BMO, the Bank of Canada is speaking to its policy course diverging from that of the Fed. As bond yields push higher due to building anticipation for a Fed rate hike, “Governor Poloz is making it clear that even as the Fed hikes, Canadian rates will stay steady,” according to a Dec. 2 BMO note.

Inflation (total CPI) remains slightly below the BoC’s October projections, although the core reading is around 2 percent. October’s inflation print was 1 percent on a year-over-year basis. The lower loonie has contributed to core inflation hovering around 2 percent and is of less concern to the bank than total CPI inflation.

The bank’s latest assessment on the housing market is unchanged from October. The overheating in Vancouver and Toronto goes on, as does cooling in Alberta and Saskatchewan resulting in risks to financial stability “evolving as expected.”

Thus BoC seems to still be in the early days of a wait-and-see period.

“Considering the uncertainties with regards to the impacts of the oil shock and the extent of Canada’s ability to capitalize on the U.S. recovery, we remain of the view that the BoC will err on the side of caution by keeping the overnight rate at 0.50 percent at least through next year,” according to a Dec. 2 National Bank note.

The Bank of Canada’s next interest rate announcement comes Jan. 20, 2016 and will be accompanied by new projections in its MPR.