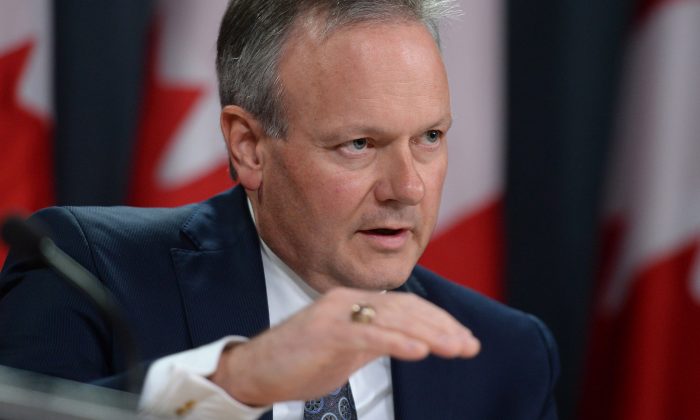 OTTAWA—The battle in the Canadian economy between the resource and non-resource sectors rages on, but despite further drops in energy prices amidst financial market turmoil, the Bank of Canada held its overnight rate target at 0.50 percent on Wednesday, Oct. 21.

It was a move widely expected by economists as the Canadian economy has started growing again after a dismal first half of 2015.

Since mid-July, the time of the bank’s prior Monetary Policy Report (MPR), financial markets have gone through a volatile period of risk aversion, adjusting to China’s economic transition and its negative effect on emerging market economies.

The bank projects global growth to be slower than it estimated in July—3.4 vs. 3.7 percent in July for 2016.

Given this backdrop, the bank revised its oil price assumptions (Brent US$50, West Texas Intermediate US$45, and Western Canada Select US$30), which are $15 to $20 dollars lower than in July. The corresponding reduction in business investment and exports in the energy sector has led to a “modest downward revision to the Bank’s growth forecast for 2016 and 2017,” according to the Bank of Canada Oct. 21 statement.

It also expects the economy to return to full capacity and for inflation to remain at the 2 percent target starting around mid-2017. The view on inflation is essentially unchanged from September; it has evolved as the bank expected in July. The underlying trend in inflation continues to be in the 1.5 to 1.7 percent range.

The bottom line is that economic momentum is building in Canada.
— Carolyn Wilkins, Senior Deputy Governor, Bank of Canada

The lower loonie is doing its part to keep inflation from falling further as it makes imports more expensive. It reached an 11-year low of US$0.745 on Sept. 29, according to data from Bloomberg. This effect is largely offsetting the hit to inflation of falling energy prices.

However, the MPR projections for “Total CPI” are lower than in July for all of 2016 before reaching the 2.0 percent target in 2017. The MPR explains that this is due to past declines in fuel prices.

Bank of Canada governor Stephen Poloz spoke about the bank’s risk management framework and that after resetting in July with a rate cut, the economy remains in the “zone” where things are in balance.

“You need to have something really big to happen to disturb that,” Poloz said in the Q&A session. “Having reset things in a balanced way, it’s a fairly solid tradeoff within that [zone] at this stage.”

Twice this year, the central bank cut rates as the effect of the oil price shock dominated anything positive in the economy. With oil prices having moved lower again, the effects of the two rate cuts and lower currency have helped other sectors of the economy recover and offset the impact.

The good news for Canada’s economy is that the economy of its neighbour to the south “is in a solid expansion,” according to the MPR. The bank expects this factor to lead to stronger Canadian exports, especially in non-energy products like lumber and agriculture.

Despite modest global growth, demand for Canadian exports is expected to strengthen and grow by over 1 percent a year faster than global GDP growth.

“The bottom line is that economic momentum is building in Canada,” said senior deputy governor Carolyn Wilkins in a prepared speech.

Exports, in general, are gaining momentum, led by the expected categories of fabricated metal products and building materials.

An additional boost to the economy would be any expansionary fiscal policy from the newly elected Liberal government, such as the deficit infrastructure spending. But the BoC cannot factor that into projections until concrete numbers are seen, for example, in a budget.

“Our view remains that if the new federal government goes ahead with its relatively aggressive spending plans (and a $10 billion deficit by next year), this further reduces the chances [and the need] of any further BoC rate cuts,” according to a note from BMO chief economist Doug Porter.

Not to be forgotten is the household sector, which continued to heat up, but the bank maintains this financial stability risk is “evolving as expected.”

Financial markets didn’t like the lower growth forecasts from the central bank. The Canadian dollar moved lower by about 1 percent to US$0.761, and the 10-year government bond yield fell by five basis points (a basis point is a hundredth of a percent) to 1.46 percent.