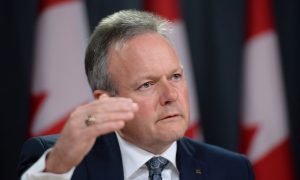 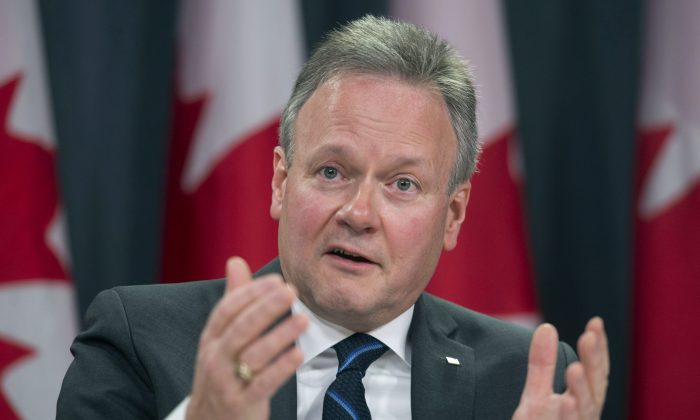 Bank of Canada governor Stephen Poloz speaks with the media on Jan. 20, 2016 in Ottawa. (The Canadian Press/Adrian Wyld)
Business

OTTAWA—In anything but an obvious decision, the Bank of Canada held its key rate unchanged on Wednesday, Jan. 20.

Two days prior, financial markets were pricing in a 63 percent chance of a rate cut and many economists were calling for one.

“Our deliberations began with a bias toward further monetary easing,” said Bank of Canada governor Stephen Poloz in his press conference speech.

But despite the turmoil in financial markets to start 2016 and a disappointing fourth quarter, key to the BoC’s decision to hold the overnight rate target at 0.50 percent is the inflation outlook staying in the “neutral zone” and the impending federal infrastructure spending giving a helping hand to the economy.

And the bank doesn’t view the recent global turmoil as something that could significantly affect global growth. “The dynamics of the global economy are broadly as anticipated in the Bank’s October Monetary Policy Report (MPR),” according to the BoC’s Jan. 20 press release.

The central bank is sanguine regarding China’s economic growth—a hotly debated topic. The BoC expects it to transition to roughly 6 percent growth in 2017. The latest official reading is 2015 growth of 6.9 percent.

The U.S.’s wobble in the fourth quarter is just that. Slower exports to the U.S. pulled down Canada’s fourth quarter growth, but given the strong employment gains last year and high consumer confidence, the bank expects U.S. growth to be close to 2.5 percent in 2016.

The narrative of the Canadian economy undergoing a multi-year transition as the resource sector shrinks and the non-resource sector expands is still intact.

In his speech, Poloz called the adjustment process “personal,” as it’s “disrupting the lives of many Canadians, whether through job losses or through higher prices for imported goods.”

“We expect that as long as indications that the economy’s transition is proceeding persist, the bank will maintain the current level of policy accommodation,” said RBC deputy chief economist Dawn Desjardins in a note.

The Canadian dollar has dropped more than 10 percent in the last three months. In 2016 alone, it has dropped nearly 5 percent. While a weak loonie benefits the export sector and helps inflation reach its 2 percent target, the rapid drop is of concern.

“When a large depreciation occurs over a short period, the pass-through to prices could be relatively rapid and thus have a greater impact on annual inflation,” according to the BoC’s January MPR.

“We might be at a point in which the marginal damage of a lower dollar outweighs the benefit,” said CIBC in a note.

The BoC now expects the economy to return to above-potential growth in the second quarter of 2016. This may seem like setting up for a repeat of early last year before oil prices fell further.

Our deliberations began with a bias toward further monetary easing.
— Stephen Poloz, Governor, Bank of Canada

The reasons for this expectation are ones the BoC posited before. Namely, a strengthening U.S. economy, weaker Canadian dollar, and improving non-resource exports are ongoing factors supporting the revival. One of the culprits for 2015’s second rate cut was the 40 percent decline in business investment in the oil patch, but in 2016, energy firms indicated to the bank that the cut would be “only” 25 percent if oil prices remained close to the assumptions used in the January projections.

The MPR uses oil price projections of US$37 a barrel for Brent, US$36 a barrel for West Texas Intermediate (WTI), and US$22 for Western Canada Select. These price levels are US$13, US$9, and US$8 lower than those used in October’s projections respectively.

On Jan. 20, WTI reached lows not seen since September 2003 of slightly below US$28 a barrel, something that casts a pall on any optimistic outlook.

The bank acknowledges it will take longer for the economy to return to full potential—around the end of 2017.

It has not factored in the proposed infrastructure spending from the newly elected Liberal government that represents “an important upside risk to the outlook,” according to the MPR. Details on the timing, size, and types of fiscal measures are expected in the next federal budget.

Growth projections were shaved from October’s MPR. The Bank of Canada now expects 2016 growth of 1.4 percent and 2017 growth of 2.4 percent. This is 0.6 percent and 0.1 percent lower respectively. After a rocky fourth quarter, the BoC estimates growth of 1.1 percent for 2015.

A day before the central bank’s announcement, the International Monetary Fund (IMF) cuts its growth outlook for Canada. It projected for 2016 growth of 1.7 percent and for 2017 2.1 percent growth. Its estimate for 2015 is 1.2 percent.

Clearly pressures are mounting against the Canadian economy with oil prices already lower than the assumptions in the projections. Much is expected from the second quarter.

It remains to be seen how much the Bank of Canada’s will can bend without breaking.