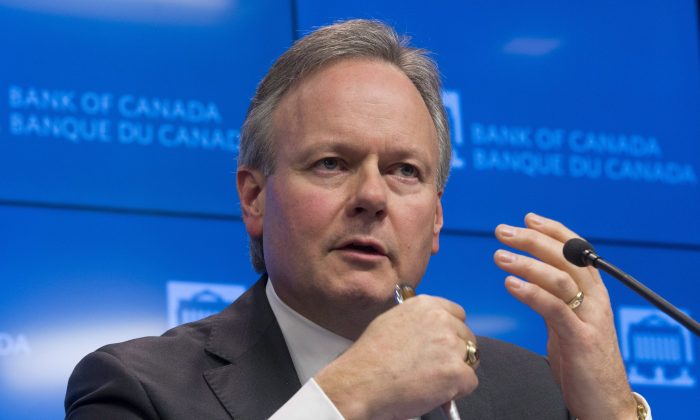 Bank of Canada Governor Stephen Poloz responds to questions in Ottawa on Jan. 17, 2018. The economy's impressive run prompted the Bank of Canada to raise its trend-setting interest rate for the third time since last summer. (The Canadian Press/Adrian Wyld)
Economy

OTTAWA—As was widely expected, the Bank of Canada raised its overnight rate target by 0.25 percent to 1.25 percent on Jan. 17 while sounding a cautious tone as risks surrounding NAFTA increases.

“Recent data have been strong, inflation is close to target, and the economy is operating roughly at capacity,” the bank’s press release states.

A 0.25 percent rate hike was almost fully priced into financial markets after a robust December jobs report. The unemployment rate fell to 5.7 percent—an improvement of more than 1 percent over 2017. And for the second month in a row, about 80,000 jobs were added.

“No question that the data on balance since October have been stronger than the base case,” said Bank of Canada governor Stephen Poloz.

Economists are divided on how many more rate hikes the bank has in store for 2018. Generally, anywhere from one to three more hikes are forecast.

“Absent any negative NAFTA outcome, we expect the policy rate to rise to 2 percent by year end [three hikes],” said Dawn Desjardins, deputy chief economist at RBC, in a note.

“Overall, this was a dovish statement relative to the minimum degree of optimism needed to justify a rate hike today,” said CIBC chief economist Avery Shenfeld in a note. “We’re looking for one further rate hike this year.” That would take the bank’s key rate to 1.5 percent by the end of 2018.

Canada’s central bank is more negative about NAFTA uncertainty than it was in October, the time of its last set of projections. It increased the estimated drag on business investment to 2 percent and trade to 0.7 percent—the two channels most vulnerable.

Also in the mix is the U.S. tax cuts package, which provides an offset to the drag on exports, but exacerbates the hit to investment as firms may be encouraged to divert their capital spending south of the border. The bank expects exports to get a 1 percent boost by the end of 2019 due to the tax reforms.

However, these are transitory effects when considering the backdrop of synchronous global growth. The bank sees the natural dynamic of exports and business investment contributing positively to domestic growth as household spending declines.

Aside from cars, exports have been on an uptrend as the structural changes in the Canadian economy since the oil price crash evolve, explained Poloz.

“We think it’s going to continue to grow with the fundamentals,” he said, mentioning the strength in IT services and food as exports.

Poloz said reacting to NAFTA uncertainty is different from reacting to the sharp decline in oil prices of late 2014. The bank could see exactly how much the price of oil had fallen and discuss with companies how they would react. Thus, the BoC was able to be almost preemptive in cutting interest rates to buffer the economy.

If NAFTA fell apart, Poloz said it would lead to “ambiguous consequences.” The bank would need the benefit of time and data to see how the fallout on the economy unfolded, particularly with respect to trade.

“We simply don’t know enough about the potential consequences of a substantial change to NAFTA to be able to pre-calculate what policy should do,” Poloz said.

If the United States were to withdraw from NAFTA, the hit to Canadian GDP would be 0.5 percent in 2019, according to analysis from Oxford Economics. No NAFTA would be much worse for Canada than it would be for the United States as Canada is more dependent on trade. But the loonie would fall 2.5 percent, mitigating to some extent, the higher cost of exports to the United States.

“They would likely turn more dovish, and possibly cut the rate preemptively, if it became very clear that the United States was about to withdraw from NAFTA,” he said in an email. “But at the moment, this is not the case.”

NAFTA renegotiations are set to continue in Montreal from Jan. 23 to Jan. 28.

The BoC estimates that the Canadian economy grew 3 percent in 2017 after slowing in the third quarter with a hit coming from export weakness. The range for the economy’s output gap is consistent with the economy operating at its full potential within a normal margin of error. The bank also revised higher its estimate of potential output—the economy’s speed limit—due to revisions to investment spending dating back to 2014.

The BoC projects GDP growth of 2.2 percent in 2018 and 1.6 percent in 2019 and for inflation to remain close to the 2 percent target over its projection timeframe going out to 2019.

Monetary policy is still quite accommodative at 1.25 percent when considering the estimate of the neutral rate—the equilibrium rate for the economy—being between 2.5 percent and 3.5 percent.

Uncertainty around trade negotiations is one reason for continued monetary stimulus. Another reason for the low rates given the strength of the economy and lack of output gap is that Canada has lost competitiveness in exports since the oil price shock, which acts as a headwind to growth, said Poloz.

The last time the target for the overnight rate was higher than 1 percent was nine years ago (1.5 percent) before the BoC started cutting rates as the 2009 recession took hold.