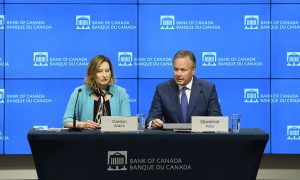 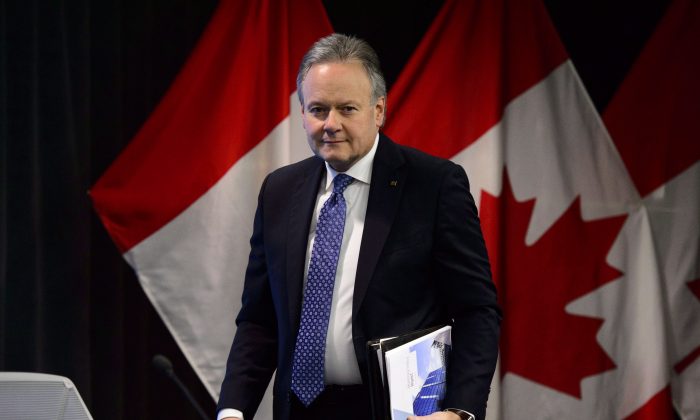 Stephen Poloz, governor of the Bank of Canada, holds a press conference at the bank in Ottawa on Jan. 9, 2019. Canada’s central bank held its overnight rate target at 1.75 percent. (The Canadian Press/Sean Kilpatrick)
Economies

OTTAWA—The fall in oil prices and greater-than-expected weakness in housing markets are two developments temporarily dampening the Bank of Canada’s outlook for the Canadian economy. To no surprise, the BoC kept its overnight rate target at 1.75 percent on Jan. 9 and implied more uncertainty about the pace of rate hikes going forward, as the economy works through a soft patch.

“The policy interest rate will need to rise over time into a neutral range to achieve the inflation target,” according to the bank’s Jan. 9 press release. The insertion of “over time” distinguishes the sentence from the Dec. 5 press release.

In a press conference, Bank of Canada Governor Stephen  Poloz said “over time” was inserted to “introduce a degree of ambiguity” into the timing of future rate hikes and that they are not on some pre-set course. “We are decidedly data-dependent and will adapt our inflation outlook and interest rate profile to developments as they unfold,” he said in a prepared speech.

“I do think the ‘over time’ statement was significant [particularly for near-term hike prospects], but they did try their best to present a balanced picture,” said Andrew Kelvin, senior Canada strategist at TD Securities. Kelvin said markets are pricing in about a 60 percent chance of only one more rate hike in 2019.

“I wouldn’t be surprised to see zero [rate hikes],” said economics professor Steve Ambler. “There’s really not too much sign of inflation picking up.” Ambler, the C.D. Howe Institute’s David Dodge chair in monetary policy, said that if the U.S. Federal Reserve doesn’t raise rates as much as was thought, then neither will the BoC.

The bank did an about-face in December given the sharp drop in oil prices and widening of the differential between Canadian oil and the U.S. benchmark West Texas Intermediate (WTI). The updated quarterly Monetary Policy Report (MPR) backs this up forecasting 2019 growth at 1.7 percent, which is 0.4 percentage points lower than what was forecast in October.

Despite the downgrade, Poloz said the bank’s governing council feels the economy is still on solid footing. “In the end, I’m confident that we’re going to be OK through all of this,” he said.

The oil price assumption supporting the bank’s January forecasts is $20 lower than in October; however, the Canadian benchmark price is just $5 lower, reflecting the effects of Alberta’s mandated production cuts. The differential between Western Canada Select and WTI has come in from over $40 to about $10.

But tough times have room to run in the oilpatch. “Investment in Canada’s oil sector is projected to weaken further,” according to the bank’s press release. With the lack of pipelines, firms’ sentiment has worsened since October and their ability to borrow money or raise capital is tying their hands.

The Canadian economy has been through a crash in oil prices many times before, but the BoC anticipates the latest woes to be roughly one-quarter as bad as the 2014–2016 episode.

Part of this is due to the Canadian economy being less dependent on the oil and gas sector. Oilpatch business investment has gone from about 30 percent to 15 percent of the Canadian economy’s total capital spending and the share of Canadian gross domestic product (GDP) from oil and gas production is estimated to have fallen from 6 percent in 2014 to 3.5 percent in 2018. Furthermore, energy firms are now more efficient having gotten used to operating in a low-price environment.

“There’s less room for the oil sector to adversely affect output because the investment projects have already been cancelled,” Ambler said. Thus the drop in investment spending won’t be as drastic as 2015.

Weighing on oil prices is slower global demand and greater supply from the United States. The BoC forecasts global growth to moderate in 2019 to 3.4 percent from 3.7 percent in 2018.

The bank sees the slowing of growth limited to the fourth quarter of 2018 and first quarter of 2019, as the rest of the Canadian economy remains fundamentally strong. Renewed robust momentum is expected by late 2019, carrying into 2020.

The positive drivers are in place. Having the new NAFTA (CUSMA) and other trade agreements in place supports expanding global demand. A lower Canadian dollar helps boost exports, and federal tax measures are in place to spur investment spending.

Higher mortgage rates, stricter provincial and municipal rules, and tougher eligibility are all working to soften housing markets. The once red-hot housing markets in Toronto and Vancouver just experienced their worst year for sales in a decade.

Housing in the oilpatch is getting a double whammy. In Calgary, prices have fallen over 3 percent since December 2017 and inventory is 30 percent higher than what is typical.

Despite these declines, RBC reported that housing affordability—costs of owning a home—hasn’t been this bad since 1990. Household debt-to-income of 173.8 percent is near an all-time high and remains a concern given the sensitivity to rising rates.

The national unemployment rate of 5.6 percent is at its lowest in more than 40 years, however, the effects of low oil prices differentiate the economic performance of the Prairies with the rest of Canada. The Canadian economy is experiencing labour shortages and robust wage growth (2.6 percent) in most of the country, while the oilpatch struggles with job losses and more muted wage growth (1.8 percent).

The bank’s estimate of the output gap—how much excess capacity exists in the economy—is bigger. It is at best a very rough estimate which was -0.5 to 0.5 percent in October. The BoC now estimates it to be -1.0 to 0 percent. This exerts downward pressure on inflation and tells the bank that the economy needs more time to heal.

The bank believes the excess slack in the economy is likely confined to the oil-producing regions. Most of the economy is operating close to full capacity with exports and non-energy investment projected to grow solidly.