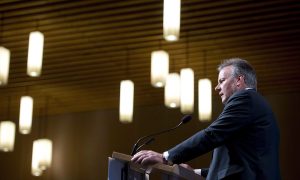 Bank of Canada, Finance Minister, and Others Face Lawsuit for Alleged IMF Conspiracy

TORONTO—It would be easy to assume the people suing the Queen of England, the Bank of Canada, and three ministers for a conspiracy against “all Canadians” wear tinfoil hats.

They don’t. They may be conspiracy theorists, but they are also intelligent, thoughtful people who have a lawyer with a history of winning unlikely cases.

The government has one more chance to have it thrown out through an appeal at the Supreme Court, but that has to be filed by Mar. 29 and that looks unlikely.

Related Coverage
Canada Targeted by More Claims Under NAFTA Than U.S. or Mexico

That means the Committee on Monetary and Economic Reform (COMER) is going to have its day in federal court.

This little think-tank alleges that the Bank of Canada, the Queen, the attorney general, the finance minister, and minister of national revenue are engaging in a conspiracy with the International Monetary Fund (IMF), the Financial Stability Board (FSB), and the Bank for International Settlements (BIS) to undermine Canada’s financial and monetary sovereignty.

No major media have covered this story. That could be because of the powerful vested interests the suit targets, as Rocco Galati, the lawyer trying the case, suggests. Or it could be because there are parts of the statement of claim that read like they were pulled from the dark corners of some Internet conspiracy forum.

They weren’t. These are serious people with wide knowledge of the financial and monetary system. And their lawyer is no slouch.

Galati has a reputation for winning unlikely lawsuits. The Globe and Mail’s justice writer Sean Fine once called Galati Canada’s “unofficial opposition” for his propensity to have the government’s edicts tossed out in court.

One recent high-profile win saw Galati block the Conservative’s appointment of Justice Marc Nadon to the Supreme Court with a suit he won in March last year.

It’s not often a government has to defend itself against a conspiracy suit in court.

Toronto-based COMER and its fellow plaintiffs Ann Emmett and William Krehm are suing over fundamental changes to the Bank of Canada’s role that were made in 1974 when the bank all but stopped making loans to the government.

The Bank of Canada (BoC) was founded in the Great Depression and played a major role loaning money to the government. It helped finance Canada’s war effort during World War II and could loan money to the government, without interest, if it chose to do so. Any profits the BoC made were returned to the government minus the Bank’s operating expenses. That last point remains the case today, with $1.7 billion sent to the Receiver General annually.

COMER alleges that by no longer providing these loans, the Bank and others named in the suit have forced the government to finance budget deficits by borrowing from private markets and paying hundreds of billions of dollars in interest. Last year, $28 billion—over 10 percent of the federal government’s $277 billion in expenditures—went to servicing the debt.

That’s more than what was spent on National Defence ($21.5 billion) and nearly as much as the Canada health transfer ($30.5 billion).

The Bank of Canada Act allows, or as COMER alleges—requires—the BoC to give the federal government loans up to a total value of one-third of the government’s predicted annual revenues. For provincial governments it is a quarter of those revenues. The loans have to be repaid within the first quarter of the next fiscal year. At that point, the government just needs to pay back the loan with incoming revenues, and take out another loan to make up any deficit.

The benefit of that is no national debt, according to Galati. However, there is a risk of inflation if too much money is poured into the economy. Some economists argue that any arrangement where central banks loan money directly to their national governments invariably leads to runaway inflation.

Galati disagrees, pointing out that the government can borrow as much as it wants from private markets and inflation is manageable.

The suit alleges that the BoC virtually stopped providing these loans at the behest of the IMF, BIS, and FSB so private interests could benefit, presumably from interest paid on the national debt. Canada’s national debt rose significantly in the years that immediately followed.

Galati predicts the government will try to delay the suit, but if it goes ahead, he said the facts will be borne out.

“A lot of the facts are not in dispute, believe it or not. They just don’t want this case heard.”

Galati plans to call the BoC governor, the finance minister, and others to testify if the case goes ahead.

The Bank can’t comment on the case directly because it is before the courts, said a spokesperson, though it did provide background materials on the Bank’s history.

The nature of money and debt is at the heart of the lawsuit COMER has filed. Representatives from the group told the Epoch Times that few people understand how money is created.

One might wonder, therefore, how much money the Bank of Canada has, and how the government can borrow from the country’s own central bank.

This is where conspiracy theory meets the cold hard facts—that the vast majority of the money in Canada’s economy was created by bankers with the push of a button. The BoC can do that also.

When someone takes out a mortgage, the borrowed money does not come from someone else’s savings. Instead, the money is created in that instant through the trick of double entry bookkeeping. The bank records the loan on one side as a liability, and the debt owed to the bank as an asset. As long as the two balance out, the system works pretty well.

Canada Is Trading Away Its Environmental Rights

Banks keep the system humming along smoothly by shuffling these balance sheets around each day. If they are short, they borrow from each other on the overnight market at the rate set by the BoC.

As long as everyone pays their loans, the systems works pretty well and basically creates wealth out of thin air. But if banks loan money to people who can’t repay it, the whole system falls apart. That is essentially what happened in the 2007 subprime mortgage debacle that brought on the global recession.

There is one problem with the system, according to its critics: interest. And if you are a government, that interest is significant.

Significant portions of COMER’s suit, including a tort portion seeking damages, were thrown out in those earlier rulings, though Galati said they could be amended and filed again. Both he and the government have until next week to file appeals of the previous ruling.

And even elements of his central argument were questioned in those earlier rulings which weighed, among other things, if the case had any chance of success. But courts are required to err on the side of permissiveness when deciding on motions to strike, as well as assume the facts claimed in the suit are true.

And so with the case set to move forward, Canadians could be in for a fascinating look at how our monetary system works and what role international financial bodies like the IMF play in Canada’s monetary and fiscal policy.

It’s not often a government has to defend itself against a conspiracy suit in court. This one promises to be interesting.

[Editors note: The article was edited from an earlier version to clarify the Bank of Canada’s practice of making loans.]