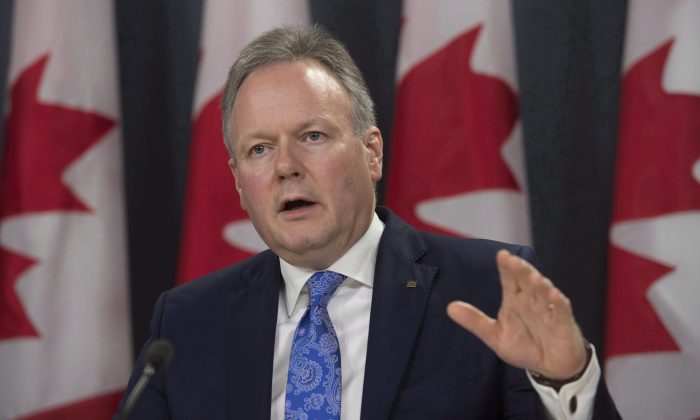 Bank of Canada Governor Stephen Poloz speaks during a news conference in Ottawa on Jan. 18, 2017 after the central bank released its Monetary Policy Report. The BoC left its overnight rate target at 0.50 percent on March 1, 2017. (The Canadian Press/Adrian Wyld)
Business

OTTAWA—In what might be a recent record for brevity by the Bank of Canada, its March 1 statement seemed to provide a counterpoint to every positive development in the economy and, not surprisingly, the overnight rate target was held at 0.50 percent.

As oil prices have stabilized, with West Texas Intermediate prices in the low US$50 per barrel range, a good argument can be made for the Canadian economy turning the corner. Economic growth, employment, and even inflation have shown signs of picking up, however international risks such as Brexit fallout, China’s economic transition, and uncertainty surrounding Trump’s policies remain.

“On balance, it’s steady as she goes,” said Oxford Economics senior economist Oren Klachkin in an email. He doesn’t think a rate cut, which was an option in January, is on the table anymore. “Having the ammo in the basket to support the economy in the case of a negative shock is for now the more pertinent concern for policymakers,” he added.

The Bank said the recent improvement in economic data for the Canadian and international economies is “consistent” with its projection, and it “remains attentive to the impact of significant uncertainties weighing on the outlook.” Gold, which tends to gain in value in times of uncertainty, has risen about 3 percent since the Bank’s Jan. 18 interest rate decision.

“We believe the positives outweigh the potential negatives at this point,” stated BMO in a Feb. 24 analysis.

The biggest economic improvement is employment as the 239,000 net new jobs added in the last six months is the strongest run in the last 15 years, according to BMO.

Business investment, which plunged along with oil prices in late 2014 and 2015, has not rebounded in kind. Total non-residential investment expenditures are expected to climb only 0.8 percent in 2017 following declines in 2015 of 7.6 percent and 2016 of 5.0 percent.

The consumer price index (CPI) rose to 2.1 percent in January—the first time it exceeded 2 percent since Oct. 2014—due in part to carbon pricing measures introduced in Alberta and Ontario. Inflation, according to the BoC’s “Common” measure is still well below the 2 percent target at 1.3 percent and the central bank stated its three measures of core inflation “continue to point to excess capacity in the economy.” The carbon pricing measures are only expected to have a temporary effect on inflation.

The Canadian dollar’s resilience since the BoC’s January meeting reflects the improving economic data, however it is an impediment to growth in exports. The loonie is at the centre of the competitiveness challenges the Bank reiterated that exports continue to face, even as it admits “growth in the fourth quarter of 2016 may have been slightly stronger than expected.”

Aside from the loonie, financial conditions have been slightly more accommodative with lower long-term bond yields and rising stock markets since the Bank’s last interest rate decision on Jan. 18.

BMO senior economist Benjamin Reitzes wrote that the BoC’s caution is intended to keep the loonie from appreciating further and longer-term interest rates from rising. The Canadian dollar dipped below US$0.75 after the announcement—a level not seen since the start of the year. But he added, “If the data continue to be positive, they won’t be able to deny the obvious for much longer.”

In a preview of the Bank of Canada interest rate decision, RBC stated on Feb. 28 that its forecast does not assume a rate hike until mid-2018. Klachkin sees a rate hike as the BoC’s next move in the first quarter of 2018.

The BoC’s next interest rate announcement date is April 12; a new set of projections will be published then.