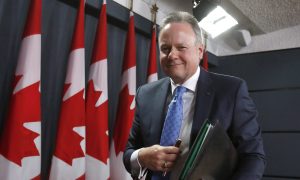 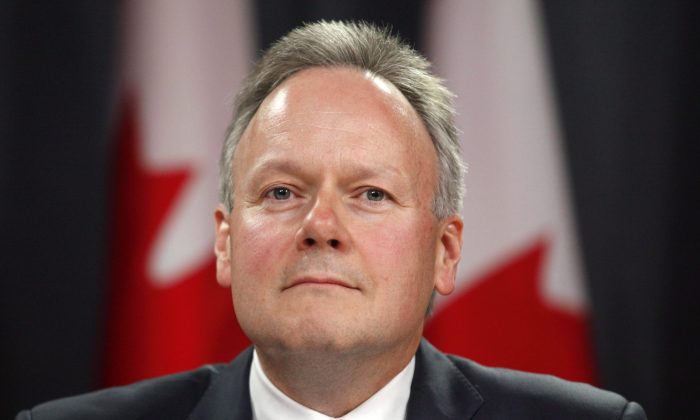 Bank of Canada governor Stephen Poloz at a a news conference in Ottawa on April 15, 2015. Canada's central bank held the target for the overnight interest rate at 0.75 percent on May 27, 2015. (The Canadian Press/ Patrick Doyle)
Business

OTTAWA—The Bank of Canada believes the Canadian economy is evolving in line with its April projections and as such, and to nobody’s surprise, the central bank kept rates unchanged. The overnight target rate was held at 0.75 percent on Wednesday, May 27.

With respect to inflation, the Bank’s statement reiterated what governor Stephen Poloz said in a speech in Charlottetown, PEI on May 19. The message is that there is still slack in the economy and, as a result, the Bank estimates that the underlying inflation trend is 1.6 to 1.8 percent, slightly below the 2 percent target.

The Bank said in April that it feels it’ll take until the end of 2016 for the economy to reach full capacity and for inflation to be close to 2 percent on a sustained basis.

The BoC acknowledged the back-up in bond yields which, all else being equal, implies a tightening of financial conditions, however, in the grand scheme of things, rates are still near historic lows. The 10-year bond yield has moved higher by roughly 0.35 percent since the April MPR.

Fed No Longer Patient on Rate Hikes, Downgrades Economy
“Financial conditions for Canadian households and firms remain highly stimulative,” said the Bank of Canada in its press release. Household indebtedness and the risks it entail are the largest threat to the financial system, but the Bank doesn’t believe any recent housing market developments are unexpected.

Compared to when the Bank cut rates in January, the 5-year bond yield, on which 5-year fixed-rate mortgages are based, has moved higher by roughly 0.15 percent. The loonie is essentially back at the level it was at after the rate cut in January, between US$0.80 and US$0.81.

The message remains the same as in the April Monetary Policy Report (MPR). And Poloz reiterated it May 19 in Charlottetown, “The signs we have seen to date lead us to believe that the impact of the shock is proving to be faster than we first expected, but not larger.” Back in April, the Bank lowered its forecast for oil prices with Brent at US$55 a barrel and West Texas Intermediate at US$50 a barrel. Oil has rebounded and is trading at levels roughly US$8 higher than those forecasts.

While the oil price shock continues to play out and business investment is cut in the oil patch, the resulting loss in income hasn’t impacted consumption.

The question to be answered over the next couple of months is whether Canada’s economy is worthy of the optimism shown by the Bank of Canada since the MPR in April?

There has been a bit of a wobble in the U.S. economy—one of the pillars that is to drive the Canadian economy forward. Fed meeting minutes from April confirm that the Fed’s appetite for raising rates in June has gone down.

The strengthening trend in the U.S. dollar is one factor driving a weak first quarter south of the border, and low oil (U.S. being a net importer) is not providing momentum to U.S. consumer spending. For the U.S., the Bank “expects a return to solid growth in the second quarter,” which will help the Canadian economy rotate toward more export and business investment.

While the first quarter was a write-off, with expectations of no growth, hope are high for the second quarter and beyond. The Bank’s April projection for second-quarter growth was 1.8 percent, 2.8 percent for third-quarter growth, and for it to average 2.5 percent until mid-2016.

The Bank of Canada’s next interest rate announcement date is July 15. A new MPR with quarterly projections will be released then as well. Preliminary readings on the second quarter and an early evaluation of the U.S.’s second quarter will have long been digested by July 15. From there, it remains to be seen if the economy has lived up to the Bank’s hopes and if a further rate cut is needed.