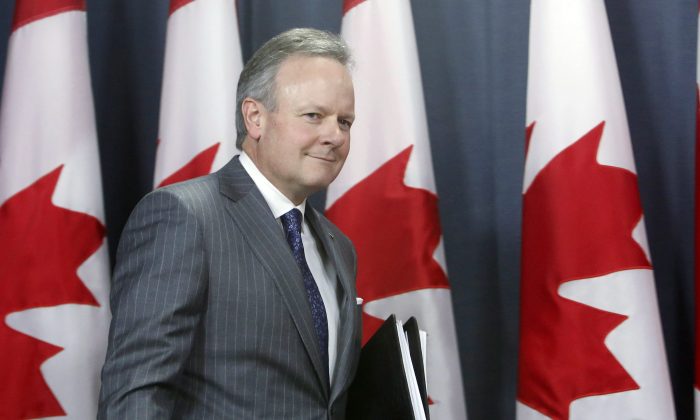 Stephen Poloz, Governor of the Bank of Canada, arrives for a news conference after the release of the Bank's Monetary Policy Report, in Ottawa on April 12, 2017. (The Canadian Press/Fred Chartrand)
Business & Economy

However, that scenario has not been playing out so far in 2017. The average sales price in the Greater Toronto Area (GTA) is up 33.2 percent in the last year and since the release of January’s MPR, Canadian and U.S. 10-year bond yields have moved lower by 0.15 to 0.18 percent.

The Bank believes speculation is playing a greater role in the GTA as price increases have surpassed what can be justified based on fundamentals like immigration, strong job growth, and low interest rates. Such a situation is unsustainable given the fundamentals, said the BoC.

“An interest rate of either 3 or 4 percent for a mortgage is not going to change someone’s mind if they’re basing their decision on the assumption that the price of the house is going to rise by an additional 20 percent next year,” Poloz said. “So interest rates are not going to skew that speculation.”

The Bank expects changes to the federal government’s housing finance policy to continue to dampen housing activity.
— Bank of Canada

The Bank’s monetary policy is a blunt tool meant to target inflation. Furthermore, it makes little sense to talk about a national housing market. The Bank is confident that the government’s latest tweaks to the housing market will result in a slowdown in housing activity and a better quality of indebtedness.

“We don’t have two instruments to manage two different things,” Poloz said. “We only have one and our primary mission is to target the inflation rate.”

For now, the risks to Canada’s financial system emanating from Toronto’s scorching housing market aren’t sufficient to put the BoC’s pursuit of the 2 percent inflation target in jeopardy.

“As in the January Report, the Bank expects changes to the federal government’s housing finance policy to continue to dampen housing activity,” according to the April MPR.

As for how Toronto’s housing market may play out, Vancouver’s housing market actually started to cool prior to the introduction of the foreign buyer’s tax last August. Poloz said the actual price level can act as a restraining force because once the price of the house gets to a certain level, fewer people are able to qualify for a mortgage that size.

“Our baseline view is of a “soft landing” for GTA housing, but I think the risks of a material slowdown, or even falling house prices, are rising for as long as the current trend persists.” Klachkin said.

The housing market has now become an upside risk to inflation in the short-term, but a downside risk thereafter.

Every April, the Bank revises its estimate of the economy’s potential growth, which gives a rough idea of how much economic slack exists. The Bank said, “Business investment remains well below what could be expected at this stage of the recovery,” which is the main drag on potential growth.

Even though near-term growth is stronger than the Bank anticipated in January and potential output is lower, inflation has been trending lower. One of the BoC’s new core inflation measures that strip out volatile components of total inflation, CPI-common, is at 1.3 percent, its lowest since at least 2009, according to the MPR.

Even with the upgrade to the economic outlook—2017 economic growth projected at 2.6 percent, up from 2.1 percent in January—material slack remains, as seen in the lower trend in the Bank’s three new measures of core inflation.

“It is too early to conclude that the economy is on a sustainable growth path,” said the BoC in its press release.