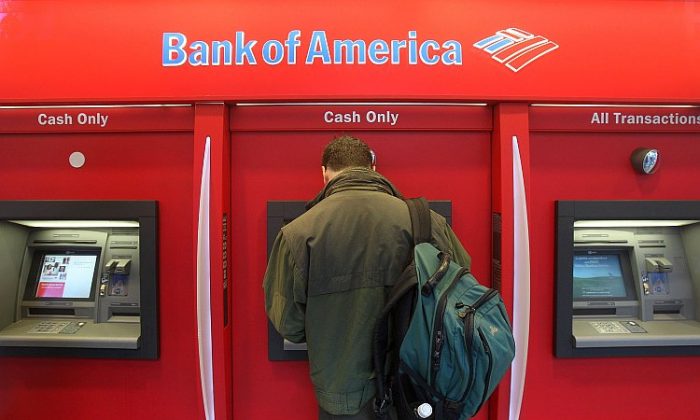 This 2008 file photo shows a man standing in a Bank of America ATM branch in New York City. B of A has agreed to pay $335 million to settle allegations that its Countrywide Financial Corp. unit engaged in discrimination against qualified minority loan applicants from 2004 to 2008. (Mario Tama/Getty Images)
Business & Markets

NEW YORK—Bank of America Corp., the nation’s second-biggest bank by assets, has agreed to pay $335 million to settle allegations that its Countrywide Financial Corp. unit engaged in discrimination against qualified minority loan applicants.

The settlement was reached with the U.S. Department of Justice (DOJ) and is the largest fair-lending settlement in history. The funds will be used to compensate certain Countrywide customers who sought loans between 2004 and 2008.

DOJ’s charges allege that between 2004 and 2008, Countrywide discriminated against Hispanic and African-American mortgage applicants who qualified for prime rates by steering them to more expensive loans with higher fees.

“These allegations represent alarming conduct by one of the largest mortgage lenders in this country, during the height of the housing market boom,” stated Attorney General Eric Holder in a press conference. “For example, in 2007, a qualified African-American customer in Los Angeles borrowing $200,000 paid an average of roughly $1,200 more in fees than a similarly qualified white borrower.”

In the settlement, the Charlotte, N.C.-based Bank of America does not admit to the charges but maintains that it would uphold fair lending practices.

Countrywide has been a thorn in Bank of America’s side ever since the bank acquired the troubled lender for $4 billion in 2008. This is the latest payment in a string of costs Bank of America has incurred on behalf of Countrywide, which at one time was the biggest subprime loan originator in the United States.

Bank of America is the first major bank since the financial crisis to be levied charges related to discriminatory lending. According to a Financial Times report, Wells Fargo Co. is currently under investigation.