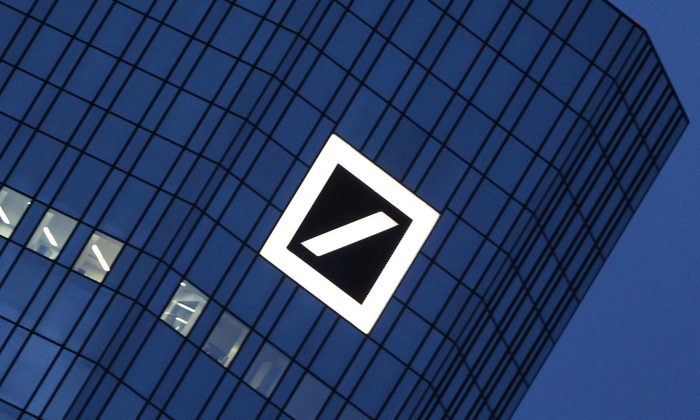 The logo of Deutsche Bank at the company's headquarters in Frankfurt, Germany, Dec. 8, 2011. Deutsche Bank is one of the banks warning about a drop in fixed income revenues.(Daniel Roland/AFP/Getty Images)
Business & Economy

As big banks get set to report third-quarter earnings over the next few weeks, investors should brace themselves. Revenues from fixed income, currencies, and commodities (FICC) are expected to be a drag on investment bank earnings.

FICC has traditionally been a bread-and-butter business for investment banks. It includes trading bonds, interest rate products, as well as currency and commodity derivatives. It’s historically been a more stable revenue stream than equities and investment banking advisory, and makes up around half of bank revenues.

While the third-quarter is typically weak for investment banks in terms of trading revenues, this year a perfect storm of a government shutdown, Federal Reserve taper surprises, and geopolitical uncertainty in Syria has likely hurt profits far more than usual.

Middle-market investment bank Jefferies Group LLC was the first to sound the alarm. It reported Sept. 17 that profits during its fiscal third quarter ended Aug. 30 dropped 83 percent due to an 88 percent tumble in fixed income trading revenues compared to the year before.

“With the significant change in expectations regarding interest rates, we experienced a very challenging summer in our fixed income businesses due to the rising rate environment, spread widening, redemptions experienced by our client base, which heavily muted trading, and related mark-to-market write downs within our inventory,” said Jeffries CEO Richard B. Handler in a statement.

Jefferies’s third quarter includes the month of June, which is less active because of the summer. However, FICC revenues from major U.S. banks, which will report later in October, are also expected to be weaker.

“While the third quarter is typically seasonally soft, Q3 2013 appears to be turning into a full-scale rout in trading as weak activity and limited risk-taking constrained performance,” Sanford C. Bernstein analyst Brad Hintz wrote in a research note Sept. 27.

The trend should be especially unsettling for Deutsche Bank and Barclays, because FICC accounts for more than half of total group revenues at these banks. Last year, FICC income was boosted by stimulus measures from the European Central Bank, which pledged to save the euro by whatever means possible. This year, bond trading slowed and prices crashed on expectations that the U.S. Federal Reserve would taper its quantitative easing program.

“My estimates suggest that FICC will fall to just 51% of the banks’ revenues from markets and investment banking this year, its lowest level since 2008,” wrote columnist William Wright of eFinancialNews. “At this rate, over the first nine months of the year, overall revenues across the industry are heading for their worst year since before the crisis.”

Underlying the surface events is the recent trend of tighter regulatory pressure that has limited the banks’ risk-taking options. FICC is a capital intensive business, which requires a huge balance sheet to finance, but the pressure has forced banks to decrease leverage and trim balance sheets. In turn, their ability to fund FICC activity was reduced.