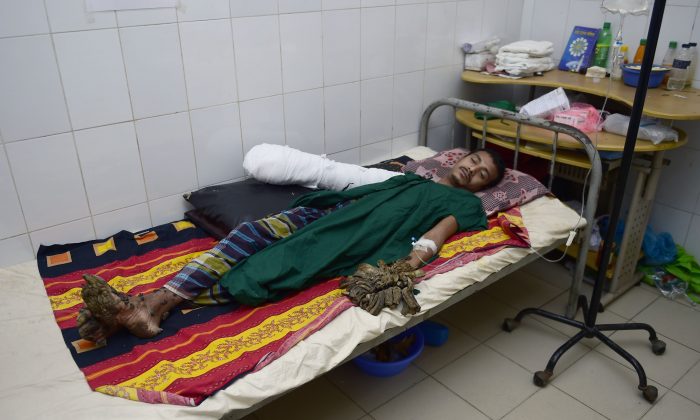 Bangladeshi man Abdul Bajander rests a day after a surgery at Dhaka Medical College Hospital in Dhaka on Feb. 21, 2016. A Bangladeshi man dubbed tree man due to large bark-like warts growing on his hands and feet underwent successful surgery on Feb. 20 to remove some of the growths. (Munir uz Zaman/AFP/Getty Images)
Asia & Pacific

A man from Bangladesh, called the “tree man,” underwent a successful surgery to remove the bark-like warts growing on his body—namely on his hands.

According to the AFP news agency, he might need several more operations. The first surgery on five fingers of his right hand was successfully done on Feb. 20


He was taken to the hospital last month to finally get rid of some of the growths, which weigh at least 11 pounds. They first began appearing 10 years ago.

Bajandar is suffering from the extremely rare genetic condition called Epidermodysplasia Verruciformis, more more simply known as the “Tree Man” disease. The disease is caused by a defect in the immune system.

The Bangladesh government will bear the cost of Bajandar’s treatment until he returns to a healthy and normal life, the Dhaka Tribune reported.

I want to live like a normal person. I just want to be able to hold my daughter properly and hug her. It would be nice to eat with my own hands as well.

“We removed some small warts from his palm. We also did dressing of his fingers, which were operated on last week. He’s now better,” Sen told AFP.

But Sen said Bajandar would need about 15 operations in all to get rid of the growths.

Related Coverage
A Bold Move to Save a Man’s Hand: Tucking It Into His Tummy

“I don’t think I can sleep tonight. For a poor fellow like me from a remote part of the country, this is too good to be true,” he told CNN.

Bajandar can’t perform any activities by himself, including eating, drinking, brushing his teeth, taking a shower, or other manual tasks. His wife and 3-year-old daughter help him.


“This is pretty much the only thing I can do with my hand,” Bajandra said, while scratching his neck. “I want to live like a normal person. I just want to be able to hold my daughter properly and hug her. It would be nice to eat with my own hands as well.”

After the operation, Bajandar said he’s determined to continue with the treatment.

“The first operation has given me hope,” he told AFP by phone from hospital.

“I don’t want to return to my village without clearing my hands and feet. I want to get back to my old life,” he added.

In Indonesia, a villager who made headlines with a similar condition underwent several operations to remove the warts in 2008. There are five people in all with the condition.