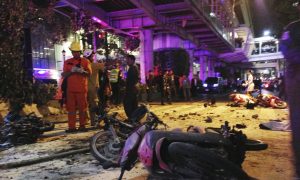 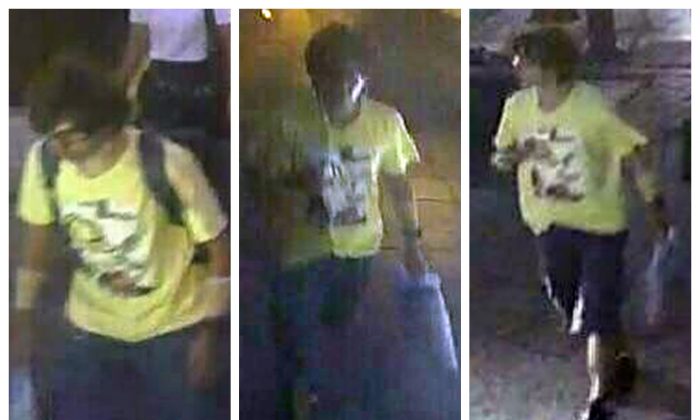 FILE - In this Aug. 17, 2015 file image, released by Royal Thai Police spokesman Lt. Gen. Prawut Thavornsiri shows a man wearing a yellow T-shirt near the Erawan Shrine before an explosion occurred in Bangkok, Thailand. National police chief Somyot Poompanmoung said Monday, Aug. 24,2015, that police were trying to "put pieces of the puzzle together" but had to use their imagination to fill holes where street-side security cameras were broken and unable to record the suspect's movements. (Royal Thai Police via AP, File)
Asia & Pacific

BANGKOK—The investigation into Bangkok’s deadly bombing turned into a blame game after police said their progress was hindered by faulty security cameras and city hall shot back Tuesday, insisting the cameras are not the problem.

In the absence of solid leads into who carried out Thailand’s deadliest attack in recent history, a debate has emerged about the street-side cameras and whether they are working or not.

The national police chief first raised the matter on Monday, saying 15 of 20 security cameras along the main suspect’s getaway path were broken, leaving police with incomplete and blurry pictures that forced them to use their “imagination” to piece together his movements.

Police chief Somyot Poompanmoung also said that police lacked high-tech equipment to clarify images of the suspect, who is seen in a fuzzy video leaving a backpack at the scene of the blast in central Bangkok minutes before the explosion.

“Our problems come from the CCTV cameras,” Somyot said Tuesday. “They are installed too high, too far apart and the camera quality makes them unable to take high-resolution footage.”

City hall, known as the Bangkok Metropolitan Authority, called a news conference Tuesday to reject the criticism of its cameras.

Maj. Vichai Sangprapai, an adviser to the Bangkok governor, said there are 107 security cameras in the vicinity of the attack, of which four were broken the night of Aug. 17 and promptly fixed. However, only one of the faulty cameras was along the man’s suspected path, he said.

“There was only one broken camera at Rajaprasong intersection, and that would not distort the investigation,” he said. “Please do not use the impairment of one camera to generalize that all the security cameras in Bangkok are inefficient.”

City hall has installed more than 50,000 security cameras around Bangkok, which are constantly monitored and maintained, said Taweesak Lertprapran, head of the BMA’s traffic and transport department.

Vichai added that the city uses cameras of an “international standard,” but some are designed to monitor the surrounding area while others are installed for security or traffic purposes, which can zoom in for details.

Other officials also chimed in Tuesday, including the interior minister, Gen. Anuphong Paochinda, who called on city hall “to check, improve and maintain the condition of CCTV’s to make sure that all of them work.”

In what has become a daily televised update since last Monday’s attack, the military spokesman said police have asked the government and businesses “to help ensure that all security cameras are working and that camera angles and definition are sufficient” to identify individuals’ faces.

The national police spokesman was asked if some of the faulty cameras the police chief referred to were owned by private businesses instead of the city.

“They’re not police cameras. I don’t know how many belong to the city,” said spokesman Prawuth Thavornsiri . “But if they say only (a few) of the cameras are broken, that can’t be true.”

The security camera debate appeared to deflect criticism of the investigation itself.

More than one week after the Aug. 17 bombing at the capital’s revered Erawan Shrine, which left 20 people dead and more than 120 injured, police appeared no closer to tracking down suspects or determining a motive for the attack.

Police have released an artist’s sketch of the suspect who was seen in the security camera video from the open-air shrine leaving a backpack at a bench and walking away. A separate camera showed the suspect, wearing a yellow T-shirt, on the back of a motorcycle taxi leaving the site.

But authorities say they don’t know if the suspect has left the country, what his nationality is or if the attack was linked to internal affairs or international terrorism.

Asked about the probe’s progress on Tuesday, Somyot said, “We are narrowing things down, but we still haven’t ruled out any motives.”