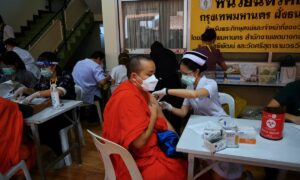 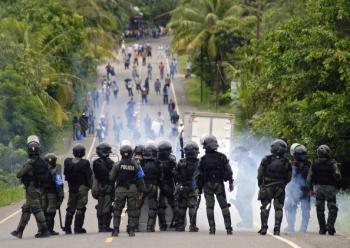 Policemen throw tear gas during clashes in Changuinola, Bocas del Toro, Panama on July 10. A strike was approved by Panamanian workers for next Tuesday against a law reform launched by the government of Ricardo Martinelli. (Bienvenido Velasco/Getty Images)
US

By Angela Wang
biggersmaller
Print
Four police officers were seized by local banana workers during a violent protest over the weekend in Changuinola, western Panama.

The banana workers protested a new government policy that would weaken the position of labor unions and make it possible for companies to fire or replace striking workers.

Police said that 102 people have been injured in the conflict.

Antonio Smith, a banana union leader, died as a result of tear-gas fired by the security forces. Another banana worker was shot to death, according to the the Associated Press.

Banana producers are among the major foreign exchange earners for Panama. The local labor union United Brands produces more than 70 percent of all Panama’s bananas.