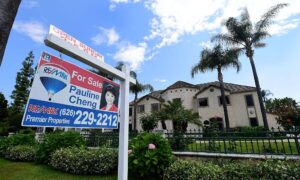 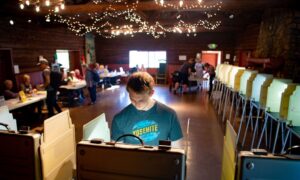 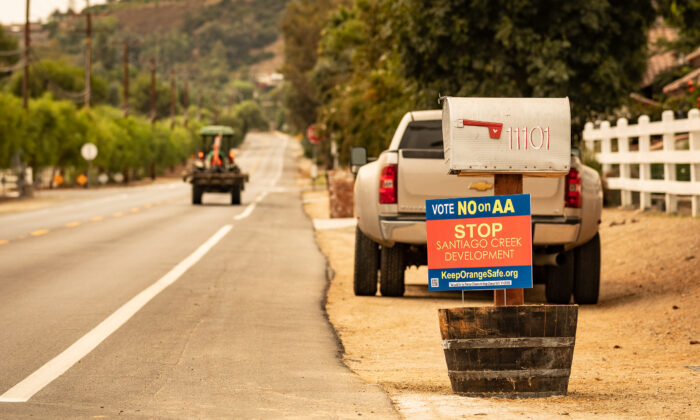 A tractor drives by a sign that urges voters to vote no on Measure AA, in front of a house in Orange, Calif., on Sept. 10, 2020. (John Fredricks/The Epoch Times)
Southern California

ORANGE, Calif.—A ballot measure in Orange, California, represents the culmination of a heated, more-than-decade-long fight over a parcel of land.

Voters in the city will be asked in November to decide the fate of 110 acres along Santiago Canyon Road. A gravel mining operation currently takes up most of it—about 90 acres—and some residents complain it kicks up dust and has impacted air quality and health.

“In my backyard, you can run your finger across any surface and it’s just covered in this gray soot,” resident Mark Moore told The Epoch Times. His children have experienced ongoing health complications, including asthma, nasal and respiratory infections, and pneumonia.

Milan Capital, a real estate management company that has been trying to build housing there since 2007, recently committed to eliminating the gravel pit, keeping about 70 acres as open space, and using the remaining 40 acres to build 128 houses.

Measure AA on the November ballot will ask city residents to approve this project by allowing a change to the city’s general plan, which is central in setting the city’s goals for development.

In addition to the 70 acres of open land promised in the ballot measure, Milan Capital has said it will dedicate a 50-acre parcel of land it owns adjacent to the property for public recreation and open space.

Opponents to the project say the residential development would change the country feel of the region. And they say the land in question is not suitable for housing because of its susceptibility to floods and wildfires; because of its risk of methane toxicity; and because the local road infrastructure cannot support more housing. Milan Capital disputes each of these claims.

Development in the area has been so hotly debated for years that the matter went before the California Supreme Court in 2016. City Council had tried to move forward with an earlier iteration of the project despite a citizen vote against it.

But the Supreme Court ruled that the City Council had to listen to the voters. So now the voters have their chance again, looking at a slightly different deal, and they’ll decide on Nov. 3.

For community leader Theresa Sears, amending the general plan isn’t an action that should be taken lightly.

“Changing general plans is a big deal,” Sears told The Epoch Times. “With this amendment … you’re signaling to residents of this town that the general plan really doesn’t matter.”

“What will happen here … if another developer decides they want to come in and challenge our plan and … start putting in these little subdivisions,” she said. “They could start doing that, and that is how equestrian communities get lost little by little.”

Sears is one of the people behind Keep Orange Safe, a group of citizens that opposes Measure AA. That opposition has been strong since Milan Capital first tried to develop the area in 2007.

In 2007, Milan Capital filed a development application requesting that a different, adjacent property—known as Ridgeline—be re-designated from “open space” to “estate residential” in the city’s general plan.

(Milan Capital bought Ridgeline in 2006, and it’s the extra 50 acres of open space Milan Capital is tacking onto the current proposal.)

When the planning commission and the city council approved the project, residents gathered signatures to get a referendum on the ballot to try to halt it.

They gathered 12,000 signatures—5,000 more than the requirement—despite pushback from people Milan Capital hired to thwart their efforts.

“People would chase us in the streets. They brought in 100 kids, and basically what they did is they would put five or six kids on every person—we were pretty much older people—and they would basically try to argue at a door or at a supermarket where we would have permission to set up. They would just harass people.”

“We did hire people … to oppose the petition-gathering [and] to present the facts, as opposed to the lies that were being spread by the people who were gathering signatures at the time,” Nichelson told The Epoch Times.

“I think that it was probably a mistake to approach the signature-gathering effort in that way. I think that maybe led to extra resentment that has [caused] people to be kind of irrational about this project,” he said.

“So, I don’t know that that was the best decision that we made. I think we have a much better project on the table now.”

Though a majority of citizens voted against the development back then, a trial court and an appeals court ruled that City of Orange officials could use their discretionary power to move the project forward.

But the persistence of the citizens opposed to the deal led to the California Supreme Court hearing the case—the first general-plan-related case the court had taken in 20 years.

In 2016, the Supreme Court decided the general plan’s “open space” designation for Ridgeline didn’t allow for residential development. The court further declared that the city had abused its discretion in attempting to circumnavigate the citizens’ referendum vote.

“Developers can learn from this court opinion,” Sears wrote in an op-ed for the Foothills Sentry in 2017. “Don’t buy property zoned ‘open space’ in hopes of building a housing tract. … Respect communities. … Respect the General Plan. Build within the zoning code.”

So Milan Capital is leaving Ridgeline as open space, but is now focusing on the 110 acres adjacent to it. It owns that property and currently leases it out to Chandler’s Sand and Gravel.

This time around, Keep Orange Safe gathered over 13,000 signatures to put the measure on the ballot.

Potential Hazards of the Land

“Orange voters need to know about the hazards of that land,” Sherry Hart-Panttaja, president of the Orange Park Association, told The Epoch Times. “I mean, it’s basically been a landfill. So that debris that’s there needs to be taken out and clean dirt brought in if you’re going to plan on living on top of it.”

“You’re also right next door to the methane field,” she said. She referred to the Environmental Impact Report (EIR) for the project: “It talks about [how] the homes have to have a methane barrier underneath and methane counters in the houses. I’m sorry, I don’t want to raise my child on top of that. I wouldn’t want to do that.”

She said there are flood and fire hazards there as well. “Those homes are going to wash away someday, they’re going to burn up, or they’re going to have health issues because they’re living on land that’s not [intended] for houses.”

Adrienne Gladson, who served as Orange planning commissioner from 2011 to 2017, also has reservations.

“In my professional opinion, there isn’t a project that’s buildable on this site,” she told The Epoch Times. “The difficult sites to develop on in Orange County are all we have left, and they’re left because of really good reasons.

“If this was developable for homes, it would have been done 30, 40 years ago, [but] it’s got so many problems, [including] flood risk and fire risk.”

According to Nichelson, who has been president of Milan Capital for 19 years, “There is nothing unsafe about the site.”

“We’re taking an abundance of caution,” he said.

Though the EIR recommends that the homes be equipped with methane barriers, called “geomembranes,” along with venting pipes and methane gas sensors, Nichelson said “there’s no methane intrusion from the landfill next door. Most of our site is further from the landfill than the homes immediately across the street … which have been there for decades.”

In addition, Nichelson acknowledged that the soil needs to be remediated: “There’s nothing wrong with it from a health and safety standpoint—it’s just not stable. But it’ll be stabilized and compacted through the development of the land.”

As far as wildfires are concerned, Nichelson noted that “the entire area had been evacuated due to wildfires a few years ago.”

He was referring to the Canyon 2 Fire of 2017, which resulted in the evacuation of thousands of residents from Orange, Tustin, and Anaheim.

“There’s really no reason why we should be more prone to a wildfire than any of the surrounding developments,” Nichelson said. Even so, he said Milan Capital will “be taking steps to landscape in such a way as to reduce the risk of wildfire.”

While the land set aside for residential housing is not in a flood zone, the area alongside the creek on-site is categorized as a regulatory floodway by the Federal Emergency Management Agency (FEMA). But Nichelson said the housing site is 20 to 30 feet above the creek.

“I don’t see how there could be a better solution for that site,” Nichelson said. “And certainly we wouldn’t be proposing [a better] one than what’s on the table now.”

“Our opponents are understandably emotional about the past, but this is a very different project, and the best project for the community that has ever been proposed for these two sites, [the gravel pit area and Ridgeline],” Nichelson said.

The EIR, on which Milan Capital is basing its assessment of safety for housing development, has come under fire.

“The EIR is a sham,” Gladson said.

She said it wasn’t impartially created by a third-party consultant hired through a process overseen by the city. According to her, this practice is “relatively uncommon.”

The Orange Park Association is challenging the EIR in a lawsuit filed November 2019.

“That, to me, is unacceptable … to let developers control their environmental documents,” Gladson said. “It’s not illegal, [but] it’s unethical, in my opinion, to go in that direction.”

“In some cities, the city will retain the consultant, and in others the consultant is retained by the applicant. … That is what occurred here.

“In either case, the requirement is that the report must reflect the city’s independent judgment. The city here made numerous comments on the EIR and it was revised in response to those comments.”

For some Orange residents, the prospect of replacing the rock quarry with open space and residential homes would be a welcome change.

Moore, 63, has lived next to the site for nearly 25 years. When he first purchased his house in 1996, the sand and gravel operation was inactive. There were talks of the site being transformed. But within a few years of buying the home, the site reopened and the gravel operation has been going ever since.

“They start every morning at 7 a.m., six days a week, in a constant cacophony of machinery and beeping and crushing,” Moore told The Epoch Times. “It just—it’s been a nightmare. I don’t know how to explain it any other way.”

Even though his children have experienced respiratory health problems, presumably caused by the operation’s dust, he kept delaying a move in hopes that a plan would come through to get rid of the pit.

“I plowed my life savings into this house, and my children were very happy in the local schools,” he said. Each year he and his wife thought of moving, but various proposals for developing the land kept coming up, and “we always decided to stick it out for another year and another year to see if that plan got approved.”

“My neighbors and I … we’re not pro-development. We’re just anti-gravel pit,” Moore said.

“I’d support a NASCAR racetrack if it was proposed for that spot rather than that gravel pit.”

Sears said the ideal option would be for Milan Capital to “clean up the mess they caused [and] let nature reclaim” the area.

Even if the measure doesn’t pass, Moore remains confident that eventually the land will be developed. “Land in Orange County is more precious than gold right now,” Moore said. “There will be houses on that property someday. Hopefully while I’m alive.”