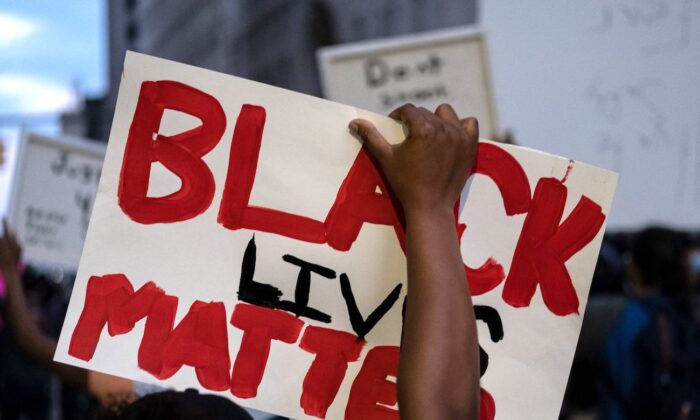 A "Black lives matter" placard during a protest in the city of Detroit, Michigan, on May 29, 2020. (Seth Herald/AFP via Getty Images)
Regional News

A bail fund organization under Black Lives Matter (BLM) Louisville has posted bail for social justice activist Quintez Brown, who was recently charged with attempted murder of a mayoral candidate.

Louisville mayoral candidate Craig Greenberg said on Feb. 14 that he was shot at by a man who had walked into his office in the Butchertown neighborhood. Louisville Metro Police said that multiple shots were fired and one round struck Greenberg’s clothing. Fortunately, no one was injured.

Police identified the shooting suspect as 21-year-old Brown and charged him with attempted murder and four counts of wanton endangerment. They said Brown appears to have acted alone and the motive remains under investigation.

A Twitter account recently announced in December 2021 that Brown was running as an independent candidate to represent District 5 for Louisville’s Metro Council. But according to country records, Brown failed to file the necessary paperwork by a required deadline in January.

Brown also previously interned for The Courier Journal, and once had a regular freelance column at the paper where he wrote about race and social justice.

According to WDRB, Brown’s attorney Rob Eggert said in court he planned to organize a psychiatric evaluation for Brown, whom he said has “serious mental issues.” Eggert also noted that Brown has no criminal history, and his only record comprises a speeding ticket in 2019.

The $100,000 amount was paid by the Louisville Community Bail Fund, a project of BLM Louisville, on Wednesday afternoon. Brown will be released to home incarceration.

According to The Associated Press, a judge on Feb. 15 ordered Brown to have no contact with Greenberg or his campaign staff, and cannot possess firearms.

The statement reads, according to WLKY: “It’s unfortunate Mr. Brown has been bailed out of jail, due to his propensity to violence. I think it’s irresponsible and I hope those who contributed to posting this bond are prepared to be held accountable if Mr. Brown injures someone while out.”

BLM Louisville organizer Chanelle Helm told The Courier Journal that the Louisville Community Bail Fund had used money that had already been raised to pay Brown’s bail. She separately told WHAS11 that the organization wanted to keep Brown somewhere safe while he waits for trial.

Brown is scheduled for a status hearing on Feb. 23.

Helm added that she wanted to put plans in place to provide Brown with access to the mental health resources he needs when he is released; she said that Brown may have PTSD due to recent years of social unrest and the pandemic. Helm also said that she knows Brown personally.

On Facebook, the Louisville Community Bail Fund said that it exists “to not only bail out folks, but provide post-release support to get them from jail, fed, and to a situation of safety.”

Brown, currently a student at the University of Louisville, previously made local news headlines when he was reported missing in July 2021 before being found safe in New York about 11 days later. When he was missing, his parents said their son could have been going through a mental health crisis.

After he was found safe, his parents issued a statement asking for patience and privacy while they attended to his “physical, mental and spiritual needs,” reported The Courier Journal.

Brown has been active with BLM Louisville and the University of Louisville’s Youth Violence Prevention Research Center, reported WDRB.

Prior to that, Brown graduated from duPont Manual High School where he had once served as the president of the Black Student Union, per WHAS11.