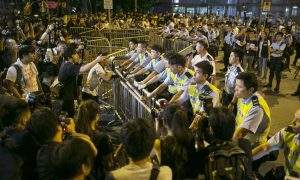 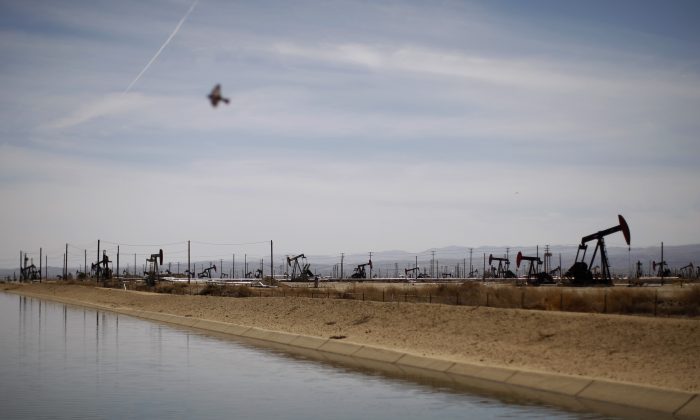 A swallows flies over a canal near Lost Hills, Calif., on March 23, 2014. (David McNew/Getty Images)
Business

Financial markets ended a volatile period on a positive note after the U.S. Federal Reserve minutes released on Wednesday implied that rates would stay low given concerns of slowing global growth.

The past five trading sessions had their share of market-moving events, but the general trend of a strengthening U.S. economy with the backdrop of weakness in Europe and China remains the same.

Most importantly, the U.S. jobs report from Oct. 3 was robust. The unemployment rate fell below 6.0 percent for the first time since July 2008, to 5.9 percent.

A new Fed gauge that relies on 19 separate jobs-related measures also showed that the labor market recovery quickened in September; however, the labor force participation rate (62.7 percent) reached a new low since the late 1970s.

The interesting dynamic, though, is the euro strengthening after it had hit its low for the period after the strong U.S. jobs report. The U.S. dollar saw profit taking after a brief period of strength. It had hit a four-year high last week and was discussed by some Federal Open Market Committee (FOMC) members as slowing the “gradual increase in inflation toward the FOMC’s 2 percent goal.”

Adding to Europe’s woes, the European Central Bank (ECB) adopted a wait-and-see mode on Oct. 2. It did not announce a target size for the asset-backed and covered bonds they will soon begin buying. The ECB’s balance sheet has been gradually sinking, while the Fed’s has continued to rise over the past three years, which is one sign the ECB has not acted decisively enough to stimulate its economy.

Oil on a Slippery Slope

Oversupply (U.S. shale, Libya) and weak global growth prospects have sent West Texas Intermediate and Brent crude down 11.3 percent and 17.3 percent year to date respectively. The effect on Brent is more magnified due to less demand from Europe.

It remains to be seen what OPEC decides to do with the oil supply it controls. For now, the path of least resistance seems to be lower for oil.

Still, the boost given by the Fed minutes should be temporary as the Fed’s asset purchases end this month, while the bigger picture is that rates are expected to rise in the middle of next year.

Some concerns about U.S. corporate earnings have also emerged given the falling oil prices and strong U.S. dollar’s impact on export-driven companies.

But for the time being, the bad news is taken to mean central banks will keep rates low, which the stock market thinks is “good news.”

Rahul Vaidyanath is a Chartered Financial Analyst (CFA) with 15 years of capital markets experience. He has worked in the Financial Markets Department at the Bank of Canada as Principal Trader, Foreign Reserves Management. He has also worked as a mortgage bond trader in the U.S. Follow him on Twitter @RV_ETBiz.