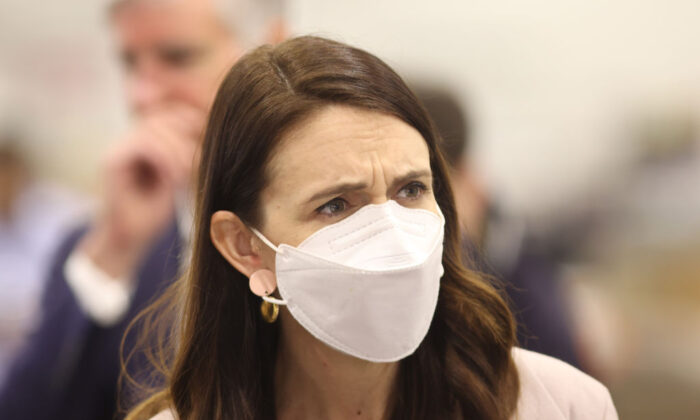 New Zealand Prime Minister Jacinda Ardern meets with staff during a visit to the Costco Warehouse, in the suburb of Westgate in Auckland, New Zealand, on Aug. 25, 2022. (Phil Walter/Getty Images)
Asia & Pacific

New Zealand government has shelved its proposal to impose the goods and services tax (GST) on KiwiSaver, New Zealand’s pension fund, less than 24 hours after it was put forward, following strong backlash from the public, the opposition party, and the fund sector.

Introduced to parliament on Tuesday evening, the tax was intended to “even the playing field” by standardising the tax on fees that are paid to KiwiSaver providers, which are not subject to GST. Currently, New Zealand’s GST stands at 15 percent.

Revenue Minister David Parker said the Treasury and Inland Revenue had advised the change to “remove a loophole” used by large financial companies.

The tax proposal, estimated to bring in a potential $225 million (US$138 million) a year in tax from 2026, would also have brought New Zealand fund managers more in line with the approach in Australia, Parker said.

“Smaller fund management providers who were doing the right thing were at a competitive disadvantage compared to others, mostly larger providers, who were using the loophole,” he said in a statement announcing the decision to abort the plan.

“Generally, it’s bad to have these sorts of distortions in the tax system as bigger players can exploit them, but if the sector as a whole is happy to operate with the status quo, then we will leave them in place.”

Prime Minister Jacinda Ardern dismissed the idea that the proposal was withdrawn due to public backlash, saying it was due to feedback from the sector.

“The original consultation [with the sector] suggested there were arguments on both sides. Now we seem to be hearing just one side,” she told reporters on Wednesday. “But the most important thing for us is to never undermine KiwiSaver.”

Parker said they originally expected small fund managers to be more supportive of the change.

“However, since the announcement, it has become clear that smaller providers now oppose it too,” he said.

The revenue minister said the government scrapped the tax proposal because it was important to uphold public confidence in KiwiSaver and ensure nothing affected New Zealanders’ willingness to save.

“I am proud of Labour’s role in introducing KiwiSaver and its role in securing the future of New Zealanders. We will never do anything to undermine it,” Parker said.

National Party Leader Christopher Luxon welcomed the government’s “U-turn” on what he dubbed the “retirement tax.”

“They’re addicted to spending and need to dream up whole new tax grabs, and that’s what this is,” he told The Morning Report before the proposal was dropped.

A petition by the National party to stop the KiwiSaver tax reached around 17,000 signatures before it was successful.